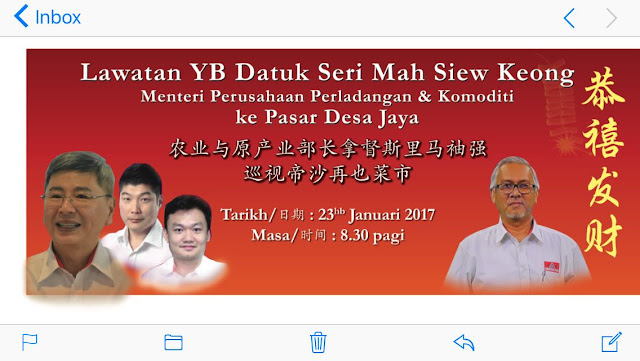 Plantation Industries and Commodities Minister Mah Siew Keong has a very important message to relay to the residents of N.37 Bukit Lanjan.

Mah, who is Gerakan president, is expected to deliver his message to Bukit Lanjan residents in a pre-Chinese New Year (CNY) visit to the Desa Jaya wet market on Jan 23, 2017.


The minister is scheduled to address the people at the market before going on a walkabout with Syed Abdul Razak Alsagoff a.k.a Pek Moh Bukit Lanjan (White Haired Bukit Lanjan).

The then newly-founded Gerakan had won the right to rule Penang after toppling the incumbent Alliance state government.

The Alliance was disbanded in 1973 following the birth of Barisan Nasional (BN).

Bukit Lanjan residents, especially those from Barisan Nasional (BN) component parties, are urged to seize the opportunity to meet up with the minister and Pek Moh.