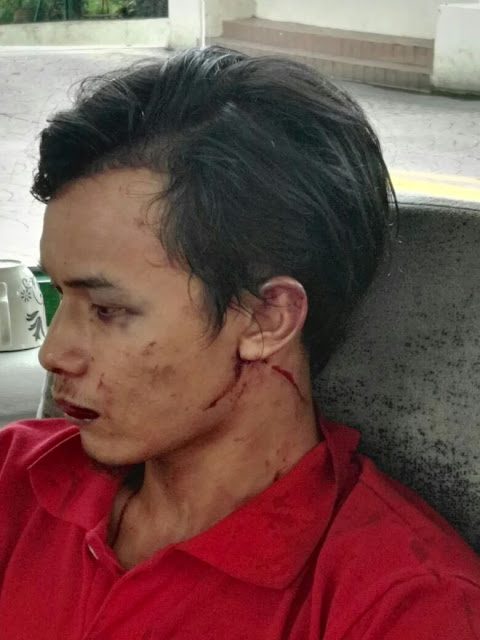 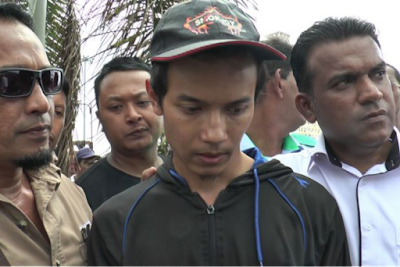 Nasrul Faiz relating the incident to reporters during the gathering by truck drivers at the Sungei Besi toll plaza on Sunday
KUALA LUMPUR: The lorry driver who was beaten up at a condominium in Bukit Antarabangsa in Ampang here has claimed that the assailants made threats against him through his employer after the incident.

Nasrul Faiz Zulfahmi, 25, said his employer told him that the assailants were “big-time gangsters".


“Yes. Boss said they were big-time gangsters,” he told reporters during a gathering of a group of truck drivers to show solidarity with him at the Sungai Besi toll plaza here Sunday.

Nasrul Faiz said he eventually lodged a report after police urged him to do so.

Describing the incident that occurred on Jan 14, Nasrul Faiz said he was driving the lorry when he accidentally reversed into a Mercedez-Benz that was parked behind him, which scratched it and caused the number plate to fall off.

He said he was then approached by a man, who asked who the lorry belonged to.

“I asked him if he was the owner of the car but he repeated his question and asked who owned the lorry,” he said.

He added that he told the man that he was the driver and the man raised his hand to hit him.

He said the man then pulled him as if he was looking for a fight.

After that, all Nasrul Faiz could remember was being hit by one man and kicked by several others.

The truck drivers from the Small and Medium Scale Entrepreneurs Alliance of Malaysia (Ikhlas) who gathered at the toll plaza urged the police to take prompt action against those responsible for the assault.

The incident, which was captured on video that went viral last Thursday, showed five men assaulting two people near the condominium guard house.

Five people, including a woman, have been remanded over the incident. - The Star Online"

Yes! Datuks in Malaysia have been in the news for all the wrong reasons recently. And, isn’t it time to review the titles bestowed on to such Datuks?

Bodyguards of a Datuk mercilessly assaulted a lorry driver just because he reversed his lorry and damaged his S-Class Mercedes Benz registration number plate.

Does the Datuk and his goons think they have the right to take the law into their own hands?

“It is a relief that the lorry driver is still alive. And he and his assailants have both agreed to settle the matter amicably without lodging police reports.

“Should the matter be allowed to be laid to rest just like that?” Gerakan Deputy Speaker Syed Abdul Razak Alsagoff asked.

“I say NO! And, I praise the IGP (Inspector-General of Police) and the police to continue with investigations into the assault with a view to prosecute.

“Police are pursuing the case as rioting in public. If the assailants are let off that easily, do you think they will not do it again?” he asked.

Syed Razak, who is Gerakan’s nominee to contest N.37 Bukit Lanjan in the coming 14th General Election (GE14), said the Datuk’s goons should be dealt with severely and made to face the full brunt of the law.

“They have not only caused grievous hurt to the lorry driver, they have shamed Datuks, rakyat dan negara (people and country). If they go unpunished, it would not only embolden them to continue with their hooliganism ways, others will also be encouraged to behave the same,” he added.

“Also, isn’t it time for all Datuks who have been found guilty of misbehaviour or committing a crime to be stripped of their honorific titles?”

These titled people have been much in the news for the wrong reasons. 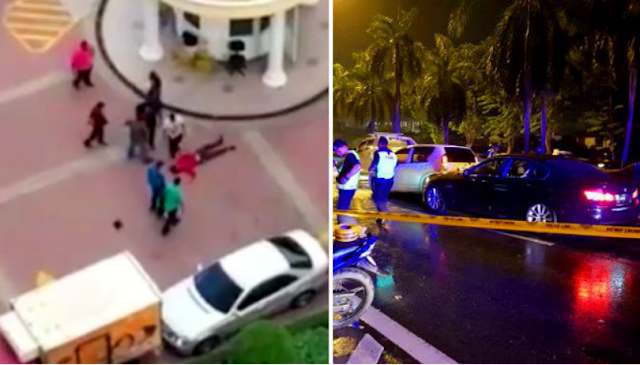 When a traffic accident happens, the two drivers involved would normally exchange information on their insurance coverage and how to contact each other. One does not expect to be beaten to a pulp, as happened last Saturday to a delivery man who backed his lorry into a Mercedes Benz belonging to a datuk.

He had stopped to deliver goods to a mini-market. He may not have realised that a car had driven-up behind him and parked. He may have failed to look into his side mirror before reversing, but what followed is beyond comprehension.

In a video footage of the incident, a man in a green shirt is seen pinning the lorry driver to the ground and repeatedly punching him. From the left hand corner of the video, we see a man in a dark brown T-shirt running up to the driver and then kicking him in the head.

The victim’s head is seen lolling about before another man, in a white T-shirt, runs towards him to kick him. He misses, but a few seconds later, a man in an electric blue T-shirt runs up and successfully deals his kick in head. The four assailants are joined by a man in a black T-shirt and they rain more kicks on the driver’s head, like they were kicking a football.

There were uniformed security guards at the scene. Why were they powerless to stop the attackers? Why didn’t other onlookers help the security guards stop the assault? Have our streets been taken over by angry young men?

What sort of datuk has a staff of thugs?

The police are treating the incident as a case of rioting. People who viewed the video may disagree. This was grievous assault and battery.

The law must come down hard on these men, whoever they are and whomever they work for.

Datuks are very much in the news these days, and often for the wrong reasons.

Last month, a datuk was shot and killed by his own bodyguard. It was alleged that the 32-year-old datuk was a gang leader and under police surveillance.

More recently, a datuk attacked a security guard for clamping the wheel of his Mercedes Benz S-Class. He had parked his car overnight at a condominium’s visitor drop-off point. Refusing to pay the fine to remove the wheel clamp, he took a bolt cutter to free his car.

A security guard who filmed the incident was verbally abused and punched in the face and the other security guards on duty were warned not to report the incident. The datuk looked like he was on a rampage and no one dared to stop him.

It was later reported that this datuk is a resident of this particular condominium in Bukit Gelugor. He is also a committee member of the Penang Chinese Chamber of Commerce and he deals in beauty products.

He could afford to drive a car with a single-digit registration number plate, but could not afford to pay the small fine for parking illegally.

As a resident of the condominium, did he not understand that a visitor drop-off point is for dropping people off or for picking people up and should not be used for long-term parking?

This arrogant man set a bad example by breaking the law three times; first, by parking illegally, second by damaging property which did not belong to him and third, by assaulting a guard who was merely doing his job.

Datuks are supposed to be the pillars of society, not gangsters.

Mariam Mokhtar is an FMT columnist.

With a firm belief in freedom of expression and without prejudice, FMT tries its best to share reliable content from third parties. Such articles are strictly the writer’s (or organisation’s) personal opinion. FMT does not necessarily endorse the views or opinions given by any third party content provider. - Free Malaysia Today"

"Settlement won’t work, we will get you, IGP tells assailants

IGP Khalid Abu Bakar says although the lorry driver and his assailants have agreed to settle the matter, police will not let the matter slide because 'the country has laws to protect the innocent'. SUBANG JAYA: Inspector-General of Police Khalid Abu Bakar has instructed Ampang police to make sure those who had attacked a lorry driver in Ampang will not get away scot-free, despite both parties agreeing to settle the matter.

The attack which happened last Saturday was captured on video and the clip was shared widely on social media and WhatsApp.

Khalid said although both the attackers and the victim had agreed to settle the matter among themselves, the police will not let them get away just like that because “the country has laws to protect the innocent from being victimised”.

“We have arrested an individual. I have instructed the Ampang police chief to track down the rest, arrest them, and throw them behind bars,” said Khalid in a press conference here.

“We can’t let things like this slide, as if our country is lawless, as if everyone is free to beat up others.

“We will not let this happen. So whatever solution they (the attackers and the victim) have agreed upon, we won’t accept it.”

He then told those involved in the attack to come forward and “surrender”, before the police go their their homes and drag them to the station.

The two-minute video clip showed a group of around five people repeatedly kicking the head and upper torso of the lorry driver who allegedly backed into a Mercedes-Benz, said to belong to a man with a “Datuk” title.

When asked if the Datuk is involved, Khalid said no.

“Don’t try to link the attack to others. The VIP (very important person) was not a part of the attack. Only the driver (of the Mercedes). - Free Malaysia Today"