View the above video clip first before you read on this blog posting.

It is simply disgusting that a restaurant can be that irresponsible and blatant in failing to observe strict hygiene when handling food.

Although this apparently happened in Penang (CORRECTION: Ipoh, Perak), this problem with errant and dirty food handlers and restaurants is a national issue.

“It is time for both state and federal government authorities to seriously look into public health and hygiene matters.

“Such food operators should be fined heavily so as to deter them from being lax. Perhaps it is time to blacklist such restaurant operators and those found failing to ensure hygiene for three or more times must be banned from the food business,” Gerakan Deputy Speaker Syed Abdul Razak said.

“Like those who abused the use of parking lots reserved for OKUs (Orang Kurang Upaya - Disabled People), let’s also shame such dirty and super unhygienic eateries,” he added. (Read this for context: http://bukitlanjan.blogspot.my/2016/12/bukit-lanjan-lets-shame-selfish.html)

“Surely we do not want such restaurants to continue to operate in Malaysia, especially those in Bukit Lanjan. If we do not do something about such errant eatery operators, they will continue with their lackadaisical attitude and diners will be put at risk.

“We must all unite to kelp keep an eye on such errant eateries. Most of us have handphones with video features. Expose the errant operators by sharing on Facebook and WhatsApp.

“Make sure the name of the restaurant and the address are clearly identified. We must press for strict public hygiene in all eateries in Bukit Lanjan,” Syed Razak said. 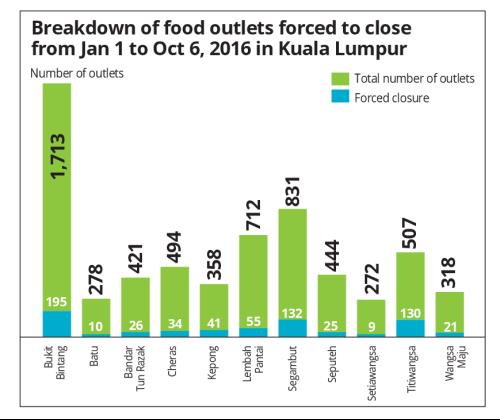 Syed Razak, who is Gerakan’s nominee to contest N.37 Bukit Lanjan, said “don’t let what happened at the eatery in the video clip happen in Bukit Lanjan”.

“We all can play a role to ensure eateries observe strict hygiene and practices. If we unite against them, they will have no choice but to comply strictly or face closure.

“Better still, close them down permanently! The health authorities, local government enforcement agencies must all buck up to crackdown on such dirty and unhygienic restaurant operators,” he added.
Syed Razak said there was no point to temporarily shut them down and then allow them to reopen after clean up for repeat offenders.

“In the case of this video clip, the restaurant may be clean but the cat is not. It may carry diseases. How do you punish the restaurant?


“Fine them and then allow them to carry on? It is time to impose heavy fines to deter restaurants from paying little or no attention whatsoever on hygiene management,” he added. 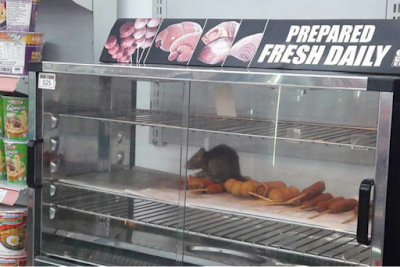 PETALING JAYA: A picture of a rodent inside a food warmer at a 24-hour convenience store in Kelana Jaya has gone viral.

The image, which was appended to a Facebook post, shows a rodent on top of a row of sausages and fish balls at the 7-Eleven outlet in Kelana Centre Point.

The incident is reported to have taken place on Jan 2.

7-Eleven Malaysia responded to the viral post on Friday, assuring that the issue was "an isolated incident".

"Please be assured, this is an isolated incident as we have certified quality assurance audits and regular pest control steps in place to prevent such occurrences," it said in a post on its Facebook page.

The company said it has conducted its own internal investigations and has cooperated with the Health Ministry office for the district of Petaling.

"The safety and well-being of our customers are of the utmost importance to us," it said.

It added that "further corrective actions" would be taken to prevent such an incident from recurring. - The Star Online"