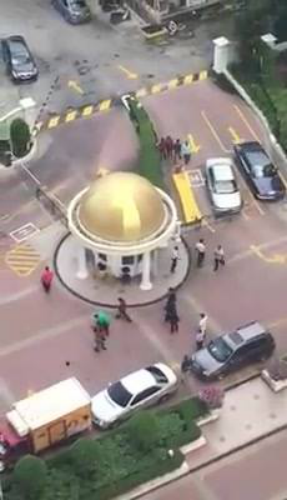 Another case of Datuk-related violence?

What is becoming of Malaysians and Malaysia?

Hooliganism and bullying are the order of the day for Malaysia?


“I do not know what really happened but the above video clip is worrying, shocking and really paints a bad image of public safety in Malaysia,” Gerakan Deputy Speaker Syed Abdul Razak Alsagoff said.


He said the police must take quick action against hooligans/vigilante groups who take the law into their own hands. And this assault occurred, apparently over a minor car accident.


“Everyone is equal before the law. The police must act against the culprits whoever they may be,” he added.

PETALING JAYA: Police have arrested a suspect allegedly involved in the incident where five men assaulted two people near the guard house of a condominium in Bukit Antarabangsa, Kuala Lumpur.

Inspector-General of Police Tan Sri Khalid Abu Bakar confirmed the arrest and urged others involved in the fracas to come forward to the police.

"Whoever is involved, come to the Ampang police station before we go to their homes," he told reporters Friday after launching Ops Selamat 10/ 2017 for the Chinese New Year festive period at the Persada Plus here.

He added that although both sides decided to settle their dispute, police will still investigate the case and catch those involved.

"We cannot let such incidents occur, as though there is no law in the country and it is a free-for-all. I have asked Ampang police to track those involved in beating up the lorry driver and catch them," he added.

The attackers initially ganged up on a man dressed in red before moving on to another man, who was in a brown shirt. The latter managed to escape the assailants.

On Thursday, Ampang Jaya OCPD Asst Comm Hamzah Elias said the fight broke out due to a misunderstanding over a minor accident involving a Mercedes-Benz and a lorry.

He said two men had driven into the condominium compound in a lorry to deliver bread and juice supplies to a convenience store there.

"They parked the lorry at the allotted spot. About 20 minutes later, four men arrived in a Mercedes-Benz and parked at the drop-off zone to attend a function.

"The lorry driver and his friend entered their vehicle after delivering the supplies and accidentally backed into the front of the Mercedes-Benz while reversing.

"This started a fight between the lorry driver and car driver," he said.

ACP Hamzah said four unknown men joined in the fight without knowing what had actually transpired.

"Both drivers suffered minor injuries in the scuffle. They did not use any weapon.

"The two parties did not lodge reports because they decided to settle the matter," he added.

ACP Hamzah said the Mercedes-Benz belonged to a Datuk who was not involved in the fight.

Investigations into the incident would still be conducted based on a report made by a security guard. - The Star Online"

The attackers initially ganged up on a man dressed in red before moving on to another man in a brown shirt, who managed to escape.

PETALING JAYA: A fight after a fender bender that was caught on camera has been making its rounds on social media.

The 2:49s video, which was shot at a condominium in Bukit Antarabangsa, Kuala Lumpur, on Saturday, shows a group of five men attacking two others near the guardhouse.

The attackers initially ganged up on a man dressed in red before moving on to another man in a brown shirt, who managed to escape.

Ampang Jaya deputy OCPD Supt Mohd Zaid Hassan said police received a report from one of the security guards there.

He said the two parties in the fight did not lodge reports as they decided to settle matters amicably.

However, he said investigations would still be conducted based on the report made by the guard.

“I also deny that a Datuk was involved in the scuffle, as what was said on social media,” said Supt Mohd Zaid.

It is believed that a misunderstanding from a minor accident involving a car was the cause of the fight. - The Star Online"

For accidentally reversing car and scratching Merc of Datok! Bodyguards took law in own hands!
Got this from a wassap group ...don't know what the true story or where it is ... But bloody heartless bastards .....

Stephen Francis聽Will those bullies be arrested by the cops ?? This is the state of our country. Pariahs.

Manmeet Chaalz聽dats why bodybuilding is kind of important.. u are able to take more damage, let it be 10 or 20 people .. this guy confirmed bedridden d lah...

Dian Abdullah聽Karma will teach these bullies a great lesson.

Loh Wan Heng Sammy聽Can someone confirm the place & get the security guard company to make the police report. Anyone know what's the status now? All net citizens can cooperate to put these gangsters behind bar...

Meng Hooi聽Hooliganism is the order in Malaysia today.