BUKIT LANJAN: Malaysians must aim to compete on a level playing field on all fronts

April 20, 2017
BUKIT LANJAN: Malaysians must aim to compete on a level playing field on all fronts

Youth and Sports Minister Khairy Jamaluddin is thinking out of the box and exceptionally forward-looking when he said Malays should view the quota system for entry into local universities as “insulting”.

He also said his aspiration was to, one day, see the Malay quota system for Bumiputeras in the country removed and the Malay community compete on a level playing field.

“Those are really not only brave words for the Malay community, that is the reality of life in this world,” Gerakan Deputy Speaker Syed Abdul Razak Alsagoff said.

He said the bumiputra rights and quota should be reviewed for better implementation to the groups within the bumiputra community “who are really disadvantaged”.

“Buniputras from well-to-do families should not be considered or given scholarships. Only the disadvantaged bumiputras should receive the bulk of all financial assistance.

“Perhaps, the exception should be, regardless of financial standing and race, for the top notch students or best students,” he added.

“Over the past six decades (since Merdeka), Malaysia has progressed by leaps and bounds. The socio-economic and political environment in 1957 and 2017 or the 21st Century era are completely different.

“How can the Malays, Malaysians and Malaysia continue to rely on a policy that was drafted decades ago, and not have it reviewed at all to suit the times and changes.

“Is it really right or wise to have a community raised and guided relying on crutches forever?” he asked.

Syed Razak, who is Gerakan’s nominee to contest N.37 Bukit Lanjan in the coming 14th General Election (GE14), said: “I shall go as far as saying that all Malaysians must strive for excellence and aim to compete in a level playing field on all fronts.”

He said Khairy was absolutely spot on when he urged the Malay community to start seeing the quota (system) “as something that is a bit insulting, that we need quota to get somewhere.”

'You don't want people to say that you are where you are only because there is a quota system,' says youth and sports minister. 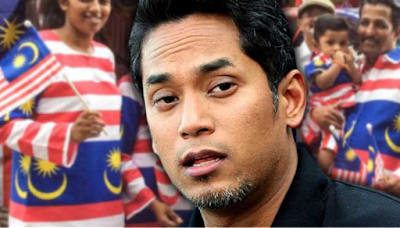 “These quotas and all that, some of it is in Article 153 in the constitution. I have been telling my Malay community, I said, ‘You know, one day, you should actually aspire, even before 2050, aspire to be in the university without quota’,” the Umno Youth leader told a dialogue on the National Transformation Plan 2050 with Indian youths at the Putra World Trade Center here today.

“We should start seeing this quota (system) as something that is a bit insulting, that we need quota to get somewhere.”

His comments came after a participant said he hoped that the quota system for Bumiputeras in the country would one day be removed.

“Just as there is a perception of discrimination amongst other communities, we also feel that maybe we are not that good, because other communities are saying that, ‘Hey you are here only because of the quota’.

“I want the Malay community to complete on a level playing field. That’s my aspiration,” said Khairy.

The dialogue session was organised by MIC Youth as well as several Indian youth NGOs.

Also speaking at the dialogue was MIC president S Subramaniam, who questioned what the retirement age in 2050 will be.

He said the question should be posed in the face of newly-acquired data that more than 500,000 Malaysians will live to over 90 years old in 2050.

“If we maintain the current retirement age at 60 years, the young won’t be able to support the older generations.”

He said after Malaysia’s independence in 1957, the average lifespan was between 50 and 60 years.

“This is why the EPF (Employees Provident Fund) had a cut-off age at 55 and the retirement age was previously at 55.