Though long overdue, it is about time for road traffic enforcement agencies to seriously rein in on traffic offenders.

However, all efforts to forge greater discipline and more law-abiding road users will all be naught if corruption is not weeded out at the same time.

“Malaysians must start learning to respect and obey all traffic rules and regulations to ensure the roads in Malaysia are safer for all road users,” Gerakan Deputy Speaker Syed Abdul Razak Alsagoff said.

He said “it is not a joke, neither is it anything to be proud about” with Malaysia being ranked 20th in road deaths in the world.

“With about half a million road accidents in Malaysia and a total of 18 people killed daily in road accidents nationwide in 2015, it is simply unacceptable to let it continue with no drastic action to check the loss of lives,” he added.

It is therefore a relief and welcoming news that the use of mobile phones while driving would be among 23 new offences in the Automated Awareness Safety System (AWAS).

This means, beside speeding and beating the red light, more road traffic offences would incur demerit demerit points for riders and drivers.

“Offenders or those who have no respect for traffic laws will have to change their bad road habits and a total disregard for the traffic laws or risk losing their driving licence,” he said. 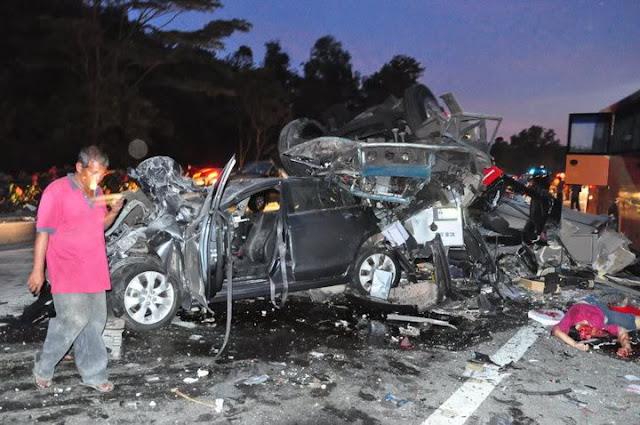 Syed Razak, who is Gerakan’s nominee to contest N.37 Bukit Lanjan in the coming 14th General Election (GE14), said all law-abiding Malaysians who value lives must support the implementation of AWAS.

“For those who are stubborn and continue to disregard the traffic laws and regulations, they do so at the risk of losing their driving licence and money to settle fines,” he said.

“We must all change to be patient on the road, to respect all traffic rules and regulations so that the roads are safer for everyone,” he added. 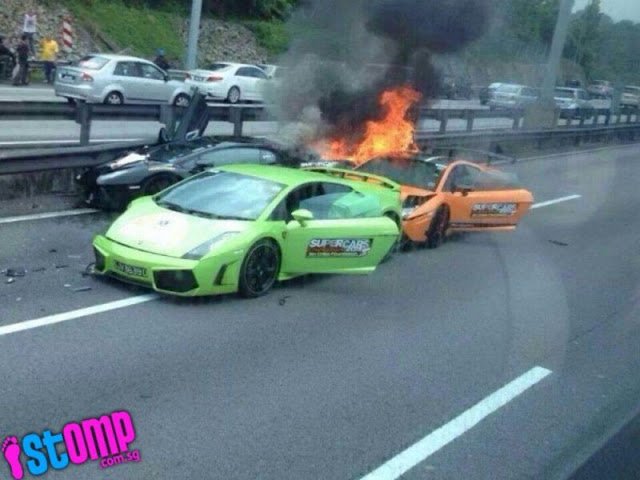 Three Lamborghinis crashed on the North-South Expressway near Seremban.

Here are four news reports on road accidents for you to digest: 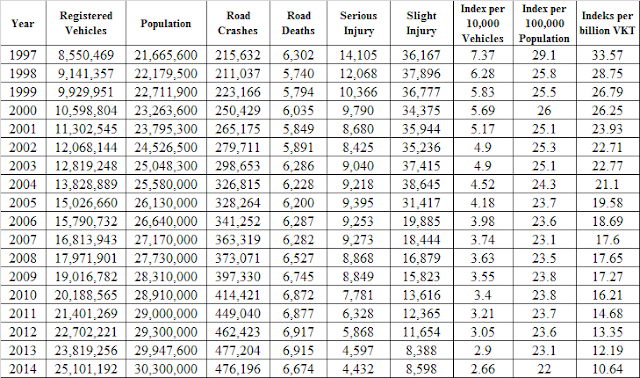 PUTRAJAYA: The Road Transport Department (RTD) will include 23 road offences in the Automated Awareness Safety System (AWAS), to be implemented in phases by the end of this year.

He said among the offences that would incur demerit points is overloading, drunk driving, using mobile phones while driving, not wearing a seat belt, not wearing a helmet when riding a motorcycle and ignoring police or RTD instructions.

Under the AWAS system, motorists will incur demerit points if they are found guilty of traffic offences and points will be given based on the nature of the offence committed.

While AWAS kicked off on a trial basis on April 1, traffic offenders will only begin accumulating demerit points from April 15 when it takes effect.

Citing the implementation of demerit points, he said the summons issued for the offence of exceeding the speed limit, recorded by the AES, will show who the driver was when committing the offence.

Nadzri said private vehicle drivers who beat the red light signal will be given four demerit points and drivers of commercial vehicles and buses would be given six merit points.

“For the third and fourth offence, the offender will be given 20 points each, and their licences will be suspended for a period of eight to 10 months, and 10 to 12 months, respectively.

“However, when the driver collects up to 100 demerit points, the licence will be revoked,” he said.

He said any driver whose driving licence is suspended or revoked must surrender the licence at any JPJ office and is prohibited from driving.

“If caught driving while their licence is suspended or cancelled, they can be fined not less than RM3,000 and not more than RM10,000 or a jail term not exceeding three years,” he said.

Nadzri said offenders with demerit points not reaching 20 points can opt for a rehabilitation course, and upon completion of the course, the demerit points will be deducted by 50 per cent as an incentive.

“This incentive will be given only once,” he said.--BERNAMA 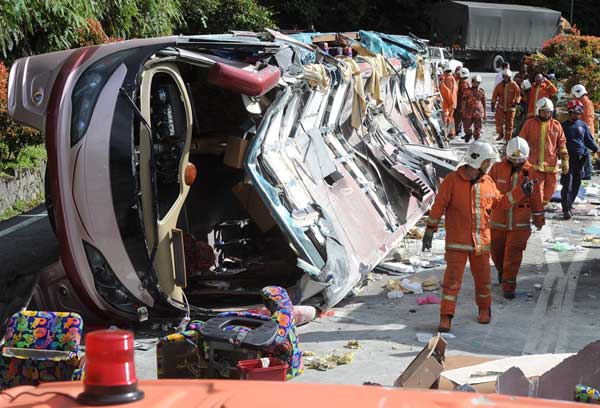 The bus crash that claimed 37 lives.

Transport Ministry: Almost half a million road accidents in 2015 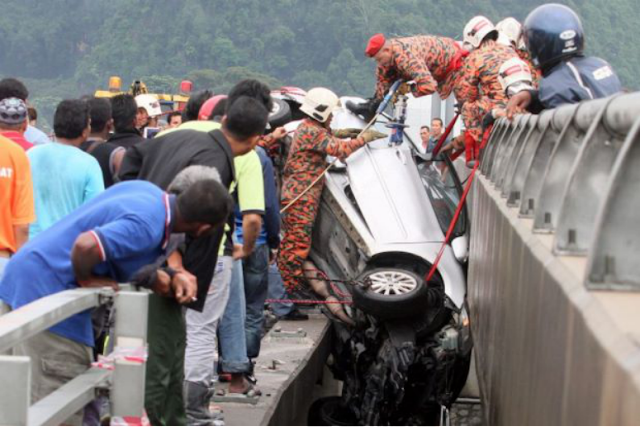 PETALING JAYA: There were almost half a million accidents on Malaysian roads in 2015, with close to 7,000 people killed, says Transport Minister Datuk Seri Liow Tiong Lai.

"This was clearly an increase from 2014 and the economic loss incurred was in excess of RM8bil. These alarming statistics continue to be addressed by the Government," said Liow in a press release on Monday.

He added that the Task Force was briefed on current road safety initiatives including road safety statistics during festive periods.

"An advocacy plan by the Road Safety Department was reviewed, accompanied by a review of the implementation of Malaysia's Road Safety Plan 2014-2020. The road safety education module was also presented," said Liow.

Liow said that the execution of the International Road Safety Assessment Programme (Irap) in Malaysia and the implementation of its framework would also be done urgently.

"The meeting unanimously agreed that these are urgent measures that need to be put in place given the fact that road accidents and fatalities continue to escalate in our nation," said Liow.

He urged all road users to be responsible and courteous.

"A dedicated Cabinet Taskforce on Road Safety cannot achieve its goals if the Rakyat and non-government organisations (NGO) does not play its role in this matter. I urge all road users to be responsible and courteous for their safety and others on the road," said Liow. - The Star Online 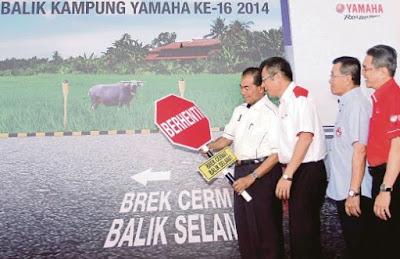 KUALA LUMPUR: IT is often said that Malaysians are bad drivers. Statistics are now proving it to be true.

The World Health Ranking 2011 has ranked Malaysia at number 20 in its list of countries with the most deaths caused by road accidents.

Road traffic accidents have also been identified as the leading cause of death in Malaysia, after coronary/heart disease, stroke, influenza and pneumonia.

Research by the Malaysian Institute of Road Safety (Miros) showed that an average of of 18 people were killed on Malaysian roads daily.

Miros’ research predicted that road fatalities would account for 10,716 deaths in 2020 compared with an average of 6,915 annual deaths in recent years.

Not surprisingly, motorcyclists account for 60 per cent (4,149) of the total number of deaths.

He said the figures were alarming considering that the government strove to improve road safety through advocacy programmes organised with help from the Road Transport Department (RTD), police and Land Public Transport Commission (SPAD).

Abdul Aziz said there might come a point in time where stricter vehicle ownership rules could be enforced to reduce the number of vehicles on the road in a bid to lower the number of fatalities.

“Restrictions in vehicle ownership may solve the problem, but we are not at that stage yet.

“The scenario will only benefit
us in the near future, where our public transportation system is operating at the highest level,” he said.

Statistics show the number of fatalities in Malaysia is increasing yearly, with the total number of accidents increasing by 80 per cent from the period between 2001 and 2013. - NST Online 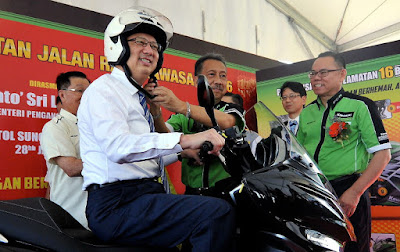 “The total number of accidents included 6,706 fatalities in 2015, as compared to 6,674 fatalities in 2014,” Liow told reporters after launching the 2016 Kawasaki Road Safety Campaign at the southbound Sungai Besi toll plaza here today.

He also expressed concern over the spike in the number of fatal motorcycle accidents in which 4,203 cases were reported between January and September last year, as compared to 4,179 cases during the same period the year before.

According to Liow, statistics showed in the past 10 years, a total of 39,774 motorcyclists were killed in road accidents.

Meanwhile, he commended the commitment of Kawasaki and the Malaysia Motorcycle and Scooter Dealers Association (MMSDA) in raising the awareness of road users, especially motorcyclists in the campaign.

“I understand this is the first campaign organised by Kawasaki with MMSDA.

The cooperation is timely, as the number of accident fatalities involving motorcycles are the highest in the country,” he said. — Bernama/malaymailonline"