BUKIT LANJAN: Who says BN and Opposition cannot work together for a better Malaysia? 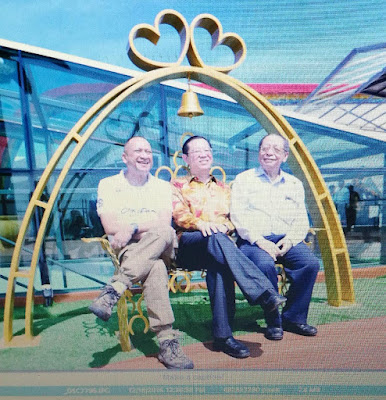 BUKIT LANJAN: Who says BN and Opposition cannot work together for a better Malaysia?

Like what has been posted in this blog previously, there is no reason why multi-racial multi-religious Malaysians, especially politicians, cannot unite to work for a better Malaysia.

Politicians from both sides of the political divide must work sincerely to serve Malaysians and Malaysia when it is not election time.

“They must cast aside politics and truly govern together and united in the interest of rakyat dan negara (people and country).

He said: “I have been advocating in this blog that national unity and nation-building should be the concern of politicians from both sides of the political divide.

“Politicians are elected to serve the people and country via good and effective governance. When a general election is over, politicking should stop.

“They should work together and focus all their energy and attention on national unity and nation-building. This will not only benefit the country but also Bukit Lanjan residents.

“That is my political conviction for Bukit Lanjan residents,” said Syed Razak who is Gerakan’s nominee to contest N.37 Bukit Lanjan in the coming 14th General Election (GE14).

(Read this for context: http://bukitlanjan.blogspot.my/2016/12/bukit-lanjan-there-are-good-and-bad.html)

He said Penang was ruled by a DAP Pakatan-led government but the Barisan Nasional (BN) federal government was also committed to ensure the state continues to prosper.

“BN’s assurance that the Tourism Ministry and Tourism Malaysia will help promote The Top in their programmes and calender as a must-visit destination for visitors is what mature politics and governance is all about.

This is online news portal Free Malaysia Today (FMT) report on what happened in Penang: 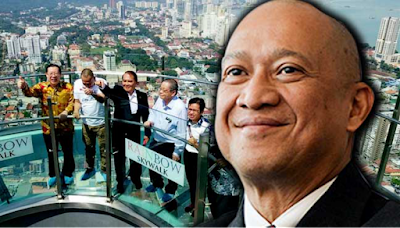 GEORGE TOWN: The opening of The Top – Penang’s first and biggest indoor theme attraction – at Penang’s tallest building, Komtar, has given Malaysia a new tourism product to sell to domestic and foreign tourists.

Tourism and Culture minister Mohamed Nazri Abdul Aziz said The Top would be promoted as a prime destination by his ministry and Tourism Malaysia.

The Top, Southeast Asia’s highest skywalk, will offer a 360 degree view of the Unesco World Heritage City as well as other parts of George Town and mainland Penang.

“I will get my ministry and Tourism Malaysia to introduce The Top in our programmes and calendar. It is a must-visit destination for visitors.

“I have always said Penang has much to offer – the sea, sand, food, heritage and the sky,” he said in a press conference after the launch of the island’s new tourist attraction.

Nazri said he could already imagine busloads of children on educational visits to Tech Dome Penang and the Jurassic Research Centre, housed in the tower.

The “Window of The Top with the Rainbow Skywalk” is situated on the tower’s rooftop at Level 68 and gives visitors a bird’s eye view of George Town, Penang Hill and mainland Seberang Prai.

Nazri praised Only World Group (OWG), the company behind turning Komtar into a new tourist destination in Penang, and said, “The place was abandoned for years and it was such a waste.”

Deputy prime minister Ahmad Zahid Hamidi, who was invited to launch The Top but could not attend the event this morning, said the new tourist attraction had revitalised Komtar and would give the state’s tourism and economy a boost.

He said The Top would breathe new life into the state and the iconic Komtar, which served as a reminder of the legacy of the late second chief minister of Penang Dr Lim Chong Eu.

“When Tun Dr Lim was appointed chief minister, he realised that there was a need for urban development and heritage conservation, and so Komtar was conceived.

“Today, this legacy that began in the 1970s continues. With the opening of The Top, the former chief minister’s vision has been revived,” Zahid said in the speech Nazri read out on his behalf.

Zahid said he believed The Top would become a world-class landmark and hopefully inspire others to thrust Penang and Malaysia into the global limelight.

OWG chairman Dr Tengku Rethwan Tengku Mansor said the group had the vision to lead and give the best in leisure, entertainment and hospitality.

“I believe The Top will be good for tourism and will impact Penang’s economy as a whole, namely in creating jobs for locals,” he said.

Komtar is short for Kompleks Tun Abdul Razak, and was the brainchild of Dr Lim. It began construction in 1974 and was completed in 1986 at RM207 million.

At the time, the 232m tower was the second tallest building in Asia, at 65 storeys, after Tokyo’s Sunshine 60.

Since its opening, Komtar has housed the offices of the chief minister, state excos, and state and federal agencies, as well as retail and food outlets. However in recent years, it struggled to bring people to the building after new and more modern shopping complexes opened nearby.

Under the present state government, efforts were made to revive the ailing property. As part of the project to give Komtar new life, three new levels were added to the tower to make it 68 storeys. The tower is now 249m in height.

Chief Minister Lim Guan Eng said that when his administration first took over in 2008, the perception was “Komtar was waiting to die”.

“The new Komtar with The Top is a symbol of success from wreckage of failure,” he said, thanking OWG founder Richard Koh and group chief operating officer Jean Koh for investing RM200 million to refurbish Komtar."