It is sad to read the never ending woes of the National Higher Education Fund Corporation (PTPTN) and its difficulties in getting borrowers to settle their loans.

A loan is a loan. Period. It is only proper and right that borrowers settle their loans.

“Granted that some graduates are unemployed and so are unable to settle their loans. But, surely not all 1.5 million of the loan defaulters are unemployed.

“Graduates who have borrowed from PTPTN must change their attitude and be thankful for the financial assistance. They must discard their selfish mentality.

“When such loan defaulters don’t try to settle their dues, they are denying others who need PTPTN loans to pursue their high education,” he added.

Syed Razak, who is Gerakan’s nominee to contest N.37 Bukit Lanjan in the coming 14th General Election (GE14), urged loan defaulters to make the first step by contacting the PTPTN to work out an easy installment loan settlement scheme.

“If PTPTN can convince a defaulter to pay up monthly a bare minimum sum, the battle is already won. I have a friend whose son is now paying RM200+ for a PTPTN loan.

“Isn’t that an affordable monthly commitment. Can the PTPTN also consider lowering the monthly loan repayment installment to about RM150? That would be great,” he added. 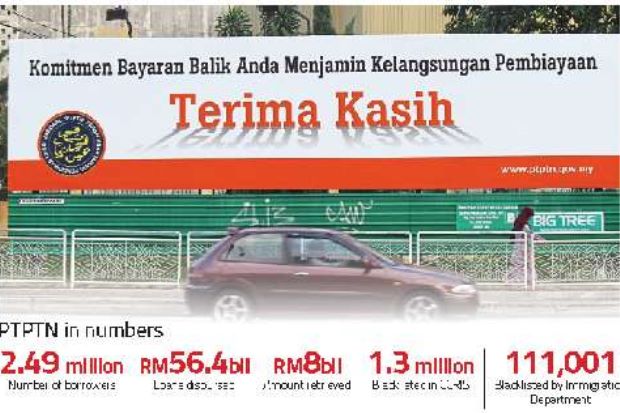 Syed Razak reminded the PTPTN that it would be a “battle won” if it can convince all loan defaulters to start paying up.

He added that there was no reason why the Inland Revenue Board (IRB) and Bank Negara Malaysia (BNM) cannot help PTPTN to locate the loan defaulters and establish their true financial status.

“The aim is not to take punitive action. They can and must be persuaded to start repaying their loans if they are found to be duly employed or self-employed.

“If such loan defaulters still continue to be stubborn and selfish, refusing to try and start settling their loans, then taking punitive action is the last resort,” he added.

Here’s a Bernama report on PTPTN loan defaulters posted by The Star Online:

KUALA LUMPUR: A total of 1,574,700 borrowers, who failed to repay their National Higher Education Fund Corporation (PTPTN) loans totalling RM32.07bil, have been listed in the Central Credit Reference Information System (CCRIS) as of Nov 10.

"The record in the CCRIS serves as the best practice for all financial institutions to ensure that the borrowers repay (their) loans accordingly," she said at the Dewan Negara sitting here.

She was replying to a question by Senator Datuk Ng Chiang Chin on the discount offered in the 2017 Budget and the latest number of loans given out by PTPTN.

Yap also said PTPTN had issued loans to 2.6 million borrowers until the end of their studies, involving an allocation of RM59.67bil as of November.