A 47-year-old illiterate grandmother and rubber tapper is now a solar engineer.

Her will to succeed and lift her and her village’s quality of life is testimony of the type of determination Malaysians must embrace to improve oneself.

“She is living proof that the illiterate and rural poor are capable of helping themselves if they have the will and determination to learn to acquire technical and vocational skills,” Gerakan Deputy Speaker Syed Abdul Razak Alsagoff said.

He said Tarahing Masanin has proven that being illiterate “is no barrier to skills development”. 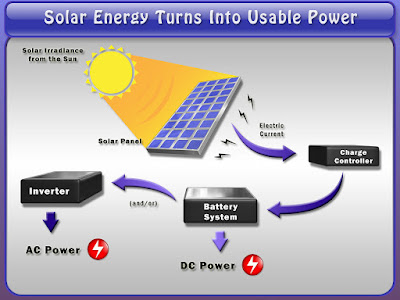 Syed Razak, who is Gerakan’s nominee to contest N.37 Bukit Lanjan in the coming 14th General Election (GE14), urged Malaysians, especially the rural poor in Bukit Lanjan, to be motivated by Tarahing’s true grit in life.

He said both state and federal governments should come up with skills development programmes aimed at empowering the illiterate and rural poor to become productive citizens who contribute to nation-building.

“The governments can also rope in non-governmental organisations (NGOs) and local social groups to help such programmes to succeed,” he added.

Here is The Star Online report on Taharing’s journey to becoming a solar engineer:

TOKYO: In a village in the interior Kota Marudu district of Sabah, a 47-year-old illiterate grandmother and rubber tapper is now a solar engineer.

In late 2014, Tarahing Masanin volunteered to go to Tilonia, India for six months to learn solar engineering from the Barefoot College, an education institution that focuses on providing education for the rural underprivileged.

Within five months of returning, some 100 homes in the village are now equipped with solar power thanks to Tarahing's newly-gained expertise.

Tarahing now joins the ranks of the “solar-mamas”, a global group of illiterate grandmothers who are competent, confident solar engineers from Barefoot College after six months of training.

In March this year, another two Malaysian solar-mamas were selected with the assistance of the Sabah Women Entrepreneurs & Professionals Association (Swepa) to attend Barefoot College to start their engineering journey.

More than 40 years after the establishment of the Barefoot college, hundreds of solar-mamas can now be found in interior regions from countries all over the world, thanks to the efforts of Indian social activist and college founder, Sanjit “Bunker” Roy. 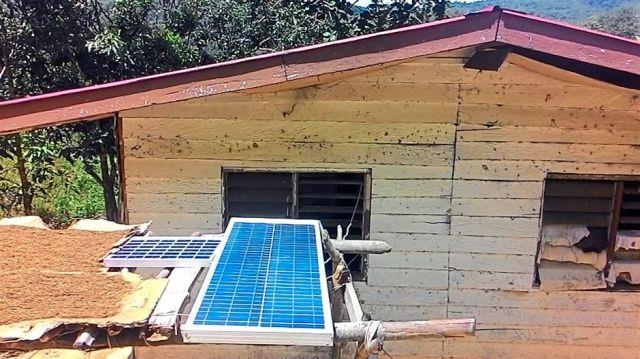 Going modern: A solar panel installed at a house in Kampung Sonsogon Magandai.

Together, the solar-mamas, all of whom are also grandmothers, introduced solar electricity to some 50,000 houses covering 500 villages in 78 countries.

“The solar-mamas know more about solar energy than any graduate after five years of university. Why? Because they are taught in a practical manner. It is only practice, practice and practice. Every six months, about forty women come to Barefoot College. All grandmothers, all illiterate, all learning through their hands,” said Roy.

Roy was in Tokyo to attend World Assembly of Women (WAW!2016) where he shared the experiences, accomplishments and vision of the Barefoot College. The assembly saw participants from around the world gathering to discuss women’s issues as part of an initiative by Japanese prime minister Shinzo Abe to encourage women’s empowerment in Japan and around the world.

Roy explained that no written or spoken method were used during the lessons at Barefoot College, because the women come from different countries.

“They speak only dialects. They don’t know English or the Indian languages. They learn to be solar engineers only through their hands,” he said.

In the college, women are taught by sign-language and iPads. Upon their return, each village will also be given an electronic workshop where a television and computer can be fitted.

To circumvent the illiteracy, all communication is pictorial. If a solar-mama needs any parts, she merely has to press a picture on the iPad and Barefoot College will ship the necessary items so that a the solar mama can continue to conduct repair and maintenance work.

Interestingly, there are no ‘solar-papas’ in Roy’s vision. 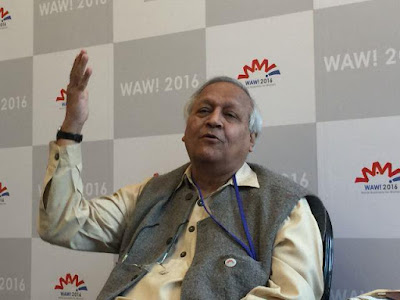 “We are trying to prove a point that any woman, whether or not she has been to school or college, can pick up the most sophisticated profession. Illiteracy should not be a barrier,” he said.

“Men are restless, ambitious, compulsively mobile and they all want a certificate. And the moment you give a man a certificate, he leaves the village for the city. Why not train women who will stay in the village, have roots in the village, will never leave and will bring the most benefit to the community?” he said.

Roy explained that if men are trained, they may not train others because of the fear of losing their jobs.

“If you train a woman, she will train other women. We have trained some 800 solar-mamas from around the world. No woman has left her village because she doesn’t want to leave. She wants to live in her community and share her knowledge,” he said.

The interesting thing about illiteracy, says Roy, is that the women never forget what has been taught.

“Even if the equipment reaches the village late, even after six months, she will never forget. We have never had a woman who has forgotten,” he said.

Returning home is a very levelling process for many solar-mamas. They are often seen as wise women, and are consulted for many issues. This is because they now have a skill that no man in the village has, sometimes even a skill that no one in the country has.

Roy notes that other engineers sometimes get upset when the solar-mamas are referred to as engineers, saying that they are actually technicians.

“I say no, they are engineers. What is the difference between an engineer and a technician apart from the certificate?” he said.

Barefoot college does not provide certification for their solar mamas, as Roy believes that the ‘certification’ is given by the community that you serve, rather than the college you attend.

“If I can introduce solar electricity to a whole village, why do I need a paper on the wall,” he says.

Barefoot College receives support from the Indian government, United Nations and its subsidiaries, non-governmental organisations (NGOs) from different countries and other philanthropic bodies."