Despite the sluggish domestic and global economic status, Malaysia continues to register a growth in motor vehicle sales the past year.

If one chooses to use this as a sign of economic success, it is in a way true. But this has come with environmental costs.

He said the perennial traffic congestion woes in Malaysia, especially in the Klang Valley, continue to worsen despite efforts being taken to try and ease the problem.

“Therefore, the annual growth of ICE-powered cars is no cheer to Malaysians and Malaysia.

“The construction of more tunnels, flyovers, etc are also of no help to the traffic congestion nightmare in the Klang Valley,” he added.

Syed Razak said the only way to reduce traffic congestion “is to encourage more Malaysians to depend on public transport to commute to and from work.

“And this can only succeed with the federal government seriously improving the country’s public transport services that must include plans for shuttle services at bus, taxi and rail stations.

"This has somewhat improved with the services of Uber, Grab and 2Go taxi services. And, the parking woes of those who want to use public transport services like, buses, LRTs, MRTs, etc is another key problem that must be resolved. The question of affordable parking rates will also have to be addressed.

“Is Malaysia’s public transport services, especially in the Klang Valley, considered reliable and efficient? If not, the federal government has to do more or try harder,” he added.

Another related concern is the health of Malaysia’s environment caused by ICE pollution.

Syed Razak, who is Gerakan’s nominee to contest N.37 Bukit Lanjan in the coming 14th General Election (GE14), said “it is baffling why the federal government is giving little attention to the sale of environmental-friendly motor vehicles.

“There are many businessmen who want to venture into introducing electric or any other more-environmentally friendly vehicles on Malaysian roads.

“Why is the federal government not giving the support or encouragement to such businessmen to kick start the market?”

Sales value of vehicle sales at RM11.4b in January

KUALA LUMPUR: Sales of motor vehicles business rose 3.7% to RM11.4bil in January 2017 from a year ago but it fell 9.4% from December 2016, according to the Statistics Department.

Sales of vehicles is part of the sales value of wholesale and retail trade which rose 8% to RM93.6bil in January 2017 from a year ago.

“However, the seasonally adjusted index of wholesale & retail trade decreased 1.5% as compared to the preceding month,” it said.

Threat to oil revenue the reason EVs are difficult to debut on Malaysian roads?

Since 2010, several companies in the private sector have been trying to import Electric Vehicles (EVs) into Malaysia but failed.

All sorts of excuses have been given to the companies, ranging from lack of support services and infrastructure to questionable safety concerns.

Is it because the rampant use of EVs would threaten Malaysia’s oil revenue as demand and prices would dive significantly?

Well, whether Malaysia continues to dissuade the use of EVs does not really matter anymore.

The global trend is beginning to go electric to green the environment or planet.

German lawmakers had last year voted to ban internal combustion engines (ICE), ironically it was the Germans who introduced such engines.

Here are two reports related to the ban of ICE:

Germany’s Spiegel Magazin reported this morning that the country’s top legislative body was able to reach a bi-partisan agreement that hopes to allow only zero-emission vehicles on EU roads in 14 years. For the resolution to be instituted across Europe, it will have to be approved by the EU. But according to Forbes, “German regulations traditionally have shaped EU and UNECE regulations.”

Greens party lawmaker Oliver Krischer told Spiegel, “If the Paris agreement to curb climate-warming emissions is to be taken seriously, no new combustion engine cars should be allowed on roads after 2030.”

The resolution calls on EU automakers to “review the current practices of taxation and dues with regard to a stimulation of emission-free mobility.” Creating a tougher tax burden could encourage manufacturers to push electric vehicles into production sooner, rather than later.

While larger approvals will still need to go through the legislative process, the fact that the country with the fourth-largest auto industry in the world is spearheading such sweeping change is a big sign of where we’re headed. It’s a road paved with slow-moving politicians making incremental changes and hoping the industry will warm up to the idea of not killing us all. 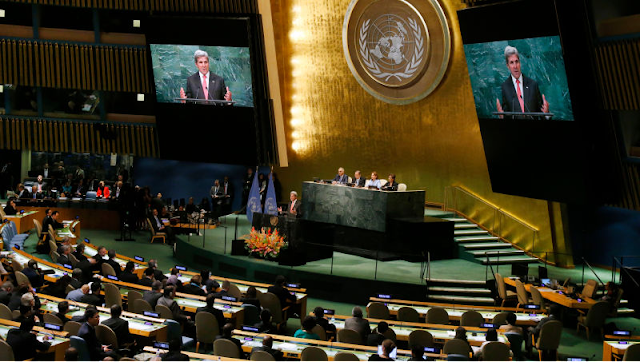 Good news, Earthlings: the Paris climate agreement had passed a critical milestone toward adoption. At a UN General Assembly meeting in New York this morning, 31 nations officially signed onto the accord, making it very likely that the deal will enter legal force this year.

You may remember that the Paris agreement—an international pledge to limit us to 2 degrees Celsius of global warming, by weaning every nation off fossil fuels—was adopted at an international summit in December 2015. But before it can go into effect, it needs to be formally ratified by 55 countries that together account for 55 percent of global carbon emissions.

The accord received a major boost earlier this month, when the United States and China, two carbon behemoths that together account for nearly forty percent of global emissions, jointly announced their intention to ratify the deal. Before today, 27 other nations that collectively represent some 2 to 3 percent of global emissions had also signed on.

Now, the chorus of agreement has grown much stronger. The 31 new pledges, which include Brazil, Mexico, Argentina and Bangladesh, mean that a total of 60 countries representing 47.7 percent of emissions have now signed on. Given this progress, UN Secretary General Ban Ki-moon and secretary of state John Kerry are both confident that the deal will be fully implemented in the coming months, according to The Guardian.

That’s very good news in light of the looming US presidential election, which features a fascist tangerine who thinks climate change is a Chinese hoax and has promised to rip the Paris agreement to shreds if elected. Once the accord is implemented, it’ll take the United States four years to legally withdraw.

Meaning, if we finish ratifying it soon, President Trump can blow hot air all day, and he still won’t be able to doom future generations tocatastrophic sea level rise. C’mon, guys. We can do this.