This is the fourth time this blog is raising the concerns and issue of baby dumping-related matters in Malaysia.

“Most of all, both the state and federal governments are the biggest culprits. They are just not putting up enough efforts and resources to try help ease or eradicate the problem.

“Especially the Health Ministry, what’s so difficult about synergising all its resources and facilities to set up baby hatches to save the lives of babies?” Gerakan Deputy Speaker Syed Abdul Razak Alsagoff asked.

He said individual Malaysians were also equally guilty of not giving the baby dumping problem enough attention and importance - in short, the majority is just apathetic.

Syed Razak said unwanted pregnancies were not just about taboo and societal stigma.

“It should not be because the real and most important concern about unwanted pregnancies is the innocent lives of babies. They have the right to live and to be protected from harm,” he added. 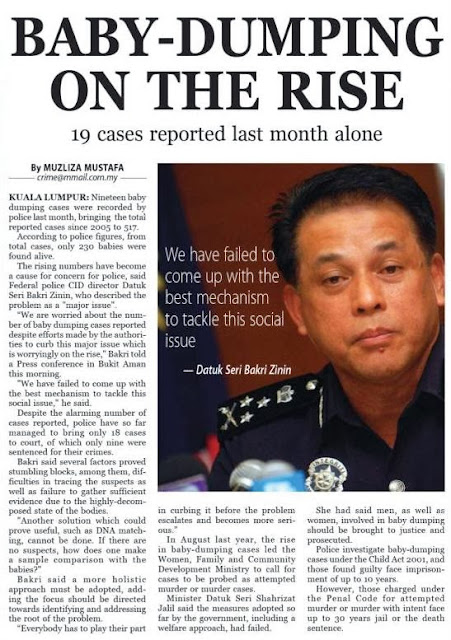 Syed Razak, who is Gerakan’s nominee to contest N.37 Bukit Lanjan in the coming 14th General Election (GE14), reiterated that blaming the baby’s parents or mother also did not contribute to helping resolve baby dumping woes.

“Whatever reasons the baby’s parents or mother have to abandon their or her own flesh and blood, they or she should be encouraged to do it without putting the baby in harms way.

“The baby could have been put up for adoption via the various authorities, like the Welfare Department, or placed in baby hatches in both public and private clinics or hospitals,” he added.

Syed Razak reiterated his appeal to both state and federal governments to tackle the baby dumping problem with more commitment and pro-active actions.

“Again, I ask, can the state and federal governments consider making it mandatory for all hospitals and clinics, including private clinics, to have baby hatches installed within their premise to help save unwanted babies?

“I see no reason why we cannot consider doing this as the problem has remained unresolved and babies continue to be dumped and exposed to danger,” he added.

“We need to aggressively hold as many public talks to educate communities and societies on why we must help save and give unwanted babies their right to survive,” he added.

"Baby dumping: Are we all to blame?

Rather than be judgmental every time a newborn is dumped or murdered, why not arrest the issue of unwanted pregnancies with pro-active approaches instead? A baby was born a few days ago. Soon after, he was hastily wrapped in a piece of cloth and tied outside to the grill of a window. His young mother then tried to feign discovery of him as she alerted her family to his presence. The physical strain of having just given birth however, was simply too much to conceal and she eventually admitted to investigating officers that the child was hers.

This 19-year-old mother, not too long ago a child herself, had somehow managed to keep her pregnancy a secret from her family. As a consequence, she had no choice but to give birth to her baby unassisted, before somehow summoning the strength to disguise that baby and pass him off as someone else’s. One can only imagine the immense pain and exhaustion she must have endured, not to mention the agony of having to suffer that pain silently so as not to alert anyone else in her household of her situation.

That baby is one of the lucky few, however. At the very least, despite clearly not wanting to claim him as her own, his young mother nevertheless kept him alive. Many undesired infants before him, have suffered far more terrible fates. We have all heard of the innumerable cases of babies being abandoned upon birth and in all likelihood, we will continue to hear of more such incidents in the future.

Over the years, babies have been dumped and discarded in the most horrific of places all over the country, with many dying tragic deaths, within hours of being born. Babies have been flushed down toilets, chucked in garbage bins, discarded at playgrounds, dumped in bushes and disposed of at bus-stops. One newborn baby was flung alive, from the third-floor of an apartment block by her mother, the impact causing her skull to shatter. She was found covered in blood by passersby, her umbilical cord still attached.

These are just some of the horrors that unwanted babies face, but let us stop for a moment and consider the mothers who resort to such extreme, inhumane measures: What could possibly drive an individual to harm an innocent, defenceless infant? What could cause someone to abandon all sense of compassion and morality? What could push an individual to mutilate, discard or kill their own flesh and blood?

We can point our fingers all we like at these women and their perceived questionable morals. We can lay the blame on the irresponsible men who impregnate them. We can judge these women’s families for not raising them to know better. Yet, what exactly have we done to address baby dumping and infanticide in our country? What has been our collective role, as a society, in trying to put an end to this?

We continue to feel exceedingly shocked and angered every time we hear of yet another unwanted pregnancy resulting in baby dumping but our actions extend only as far as our outraged reactions and then we do no more. We consider ourselves a nation of citizens, supposedly driven by religious ethics and a strong moral compass and yet we continue to passively bear witness to such heinous tragedies unfolding within our midsts.

The Malaysian statistics on baby dumping are deeply concerning. An average of 100 babies are dumped every year, with more than half found dead. These are only the cases that we know of; presumably many other unwanted babies have been disposed of, with no chance of ever being found. The mothers in these instances are very often young and unmarried, with teen pregnancies being one of the main contributing factors leading to babies being dumped.

We cannot, therefore, continue to bury our heads in the sand and pretend that our efforts in combating the issue thus far have been effective and adequate. Whilst certain measures have been implemented towards ending this vicious cycle, our general position on the issue however, still remains largely reactionary.

Whilst initiatives, such as the baby hatch, counselling support lines as well as care centres, have undoubtedly helped rescue the lives of many babies, who may have otherwise been dumped or killed, we are still failing to address the primary causes behind these undesired pregnancies. We are rendering our concern for these unwanted babies without taking the necessary efforts, where possible, to avoid them from being conceived in the first place.

The reality is that many young Malaysians are sexually active and engage regularly in pre-marital sex. Whilst this is no doubt a less than ideal actuality, we should concern ourselves more urgently with the fact that many are becoming involved in sexual relations blindly without first truly understanding the risks and consequences associated with unsafe sexual practices.

The implementation of a genuinely comprehensive sex education programme in schools continues to be a highly contentious subject, with some quarters claiming that it will further encourage and influence teenagers to engage in sexual relations and promote immoral behaviour.

Such assertions nevertheless, have been proven, time and time again, to be concerns that are baseless and unjustified, with research indicating that teen pregnancy rates are in fact reduced when adolescents are armed and empowered with adequate knowledge about their sexuality.

By continuing to dismiss the dire need for comprehensive sex education in this country, we continue to fail the younger members of our society who we all have a collective duty and responsibility towards.

As such, it really is about time that we stopped being in denial about certain realities of baby dumping and infanticide. Ignorance is certainly not bliss in this matter. Rather than constantly bemoaning the fate that falls upon these unfortunate babies and instead of wagging our fingers and clicking our tongues judgementally every time a newborn is dumped or murdered, let us try and arrest the issue using a pro-active approach for a change.

Gayatri Unsworth is an FMT columnist.

With a firm belief in freedom of expression and without prejudice, FMT tries its best to share reliable content from third parties. Such articles are strictly the writer’s personal opinion. FMT does not necessarily endorse the views or opinions given by any third party content provider."