February 19, 2017
UPDATE: (Video) The untold story behind the bicycle tragedy

"(Video) The untold story behind the bicycle tragedy

In the post by Zulhazri Abu Bakar, a policeman accounts for the incidents before the tragedy. He wants to remain anonymous.

"We have warned and cautioned them even using a loudspeaker. Some of us have even lost our patience and threw away their bicycles, just to warn them so that they don't repeat it again," he said.

But all these was in vain. They were too free from parents supervision, he said.

He said that the group was not just from around Johor Baru but also from Plentong, Pasir Putih, Masai, Tampoi, Kempas, Skudai, and Tiram.

They would come in groups almost every weekend.

He added that if the police chased them, they would scream and taunt the authorities by carrying their bikes to the other side of the road.

"They don't cycle by the side of the road but in the middle of the roads where they lost their lives. 95% of their bikes are small with small tires."

He called for the public not to blame the authorities, but parents and guardians have to play their roles as well.

"Teenagers would want freedom and to have fun. Their don't mind lying to their families with all types of promises and reasons just so that they can go out. Some are out for days."

He said the teenagers were between 10 years old to early twenties.

Together with the post, two videos were uploaded showing the daredevil bicycle gang evading the police. - theSundaily" 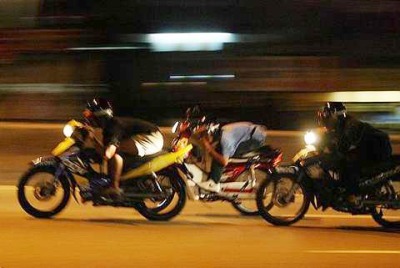 The above video clip was shared in electronic social media Facebook and WhatsApp.

It claims the video clip was shot just before the tragic accident that killed eight teenage cyclists in Johor Baru.

Whether the above video clip was really shot before the accident is secondary. The daredevil antics of the teenagers in the video clip is the issue.


“What was a group of teenagers doing cycling on the road at 3am, endangering themselves on a public road?” Gerakan Deputy Speaker Syed Abdul Razak Alsagoff said.

He said the eight deaths could have been avoided if the traffic police had put a stop to the nocturnal rendezvous of the teenagers as seen in the attached video clip.

“The police are not aware? Well, Deputy Home Minister Nur Jazlan Mohamed claimed night cycling involving children and teenagers in the city had been raised on numerous occasions the past 10 years but with no solution reached,” he added.

Syed Razak said the police and parents of teenagers must put their foot down when teenagers are engaged in activities that endanger not only themselves but also other road users.

“Disobedience is no excuse for the police and parents to not do anything about such dangerous behaviour or stunts by teenagers on public roads.

“They are a public nuisance on the roads, obstructing traffic and causing accidents,” he added. 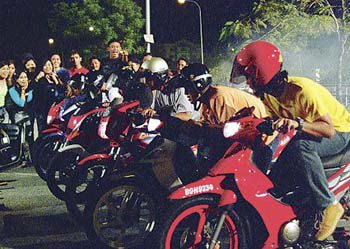 Syed Razak, who is Gerakan’s nominee to contest N.37 Bukit Lanjan in the coming 14th General Election (GE14), said the teenagers now claim that the woman car driver that rammed into them, killing eight, was using a handphone.

“The police have dismissed the teenagers’ allegation. The allegation is secondary. The fact is the teenagers were posing a nuisance on a public road. If they had not behaved the way they did, this tragedy would never have happened,” he added.

Syed Razak said the police, parents and the relevant authorities must put a stop to such teenage misbehaviour immediately and at all cost.

“Stop encouraging them from participating in racing on public roads. They are as dangerous as the Mat Rempits who hog public roads,” he added.

Here are four reports on the tragic accident posted by The Star Online: Deputy Home Minister Datuk Nur Jazlan Mohamed said that so far there has been no indication that she was speeding, drunk or using her mobile phone during the Saturday 3.30am incident.

He said he hoped people will not speculate and turn the incident into something racial.

Nur Jazlan was speaking to reporters during a Chinese New Year open house organised at his Pulai constituency here Sunday.

He reiterated the need for parents to be responsible enough to know the whereabouts of their children at night instead of putting the responsibility on police.

"The state government can also get local councils to take action against children loitering in the city at night," he added.

On Saturday, a group of eight teenage cyclists were killed in an accident near an exit of a bypass.

A car driven by a woman in her 20s ploughed into them along Jalan Lingkaran Dalam, near the Mahmoodiah Muslim cemetery.

JOHOR BARU: The police have denied an allegation that the woman who rammed into a group of teenage boys on their bicycles at Jalan Lingkaran Dalam near here, early Saturday, was using her mobile phone while driving.

Johor Baru South police chief ACP Sulaiman Salleh said investigations had been carried out, and there was no truth in the allegation.

"If the survivors did see it (the woman using her handphone), they should come forward to give their statement to the police," he told Bernama.

He was asked to comment on claims by some of the survivors that the 22-year-old woman was using her phone while driving.

According to Sulaiman, the woman, an employee at a restaurant in Taman Ungku Aminah, was just returning from a friend's house in Taman Pelangi when the incident occurred.

In the 3am incident, eight teenage boys were reportedly killed after being hit by a car driven by the woman, leaving five more with broken legs, two in critical condition due to brain haemorrhage, and another with head wounds.

The incident was believed to have occurred when the teenagers were cycling towards Dataran Bandaraya Johor Baru. - Bernama

Teen cyclist victim's family had asked him to stop 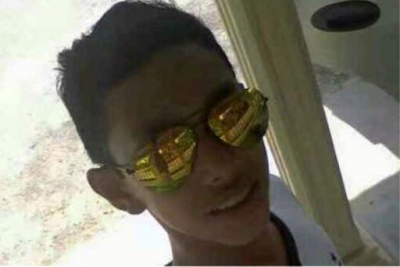 JOHOR BARU: The family of Haizad Kasrin (pic), one of the teenagers who died in the cycling tragedy in Jalan Lingkaran Dalam here early this Saturday morning, had repeatedly warned him against his joyriding activities.

His sister, Aspalilah, said their mother, Jamilah Sulaiman, 54, was not in favour of him cycling in the city as it was too dangerous.

"My brother's night-cycling activities added to my mother's concern but he was adamant," she told reporters at the lobby of the Hospital Sultanah Aminah mortuary here.

Aspalilah said Haizad, the eighth of nine siblings, became interested in cycling last year after seeing his school friends' involvement in the activity.

Haizad's remains were buried at the Sungai Tengkorak Muslim Cemetery in Plentong, after asar (evening) prayers.

Meanwhile, Nurul Ain M. Azahar, the sister of another victim, Muhammad Firdauz Danish M. Azahar, said her 16-year-old brother was supposed to register for an automotive training course at the E-Access International College in Kulai this Monday.

"My brother said he would leave the family soon, but we did not think much of it as he was due to register at the college's hostel," she said.

She said her brother was a friendly boy who had loved cycling since Form One and often cycled in Taman Damai Jaya.

"My brother, who went out yesterday around 10pm, said he wanted to go out cycling.

"He also reminded my mother to lock the doors fearing that he would probably not come home that night.

"However, we were shocked to receive a call at 3am from his friends, informing us that my brother had been involved in an accident," she said. 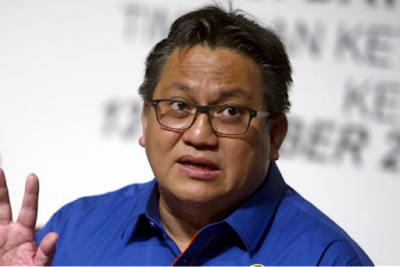 JOHOR BARU: Night cycling involving children and teenagers in the city has been raised on numerous occasions from 10 years ago, but with no solution reached, said Deputy Home Minister Datuk Nur Jazlan Mohamed (pic).

He said the authorities, including the police, had tried to curb the activity, including giving advice that went unheeded.

“Therefore, I urge parents and guardians to supervise their children’s activities.

“We do not want what happened today to recur,” he said in a statement conveyed to the media by his special officer, Datuk Rashid Kasman, at the Forensic Department of Hospital Sultanah Aminah here Saturday.

The statement was issued in response to an incident in which eight teenage cyclists were killed after they were mowed down by a car driven by a 22-year-old woman at about 3am on Saturday.

Another eight were injured, including two critically, in the accident that occurred along Jalan Lingkaran Dalam near the Mahmoodiah Muslim cemetery here.

“An incident like this has been expected and it happened today.

“Prior to this, there have been cases involving child and teenage cyclists, but it involved one or two persons only, unlike today,” Nur Jazlan said.

He also expressed his condolences to the families of the victims. – Bernama"