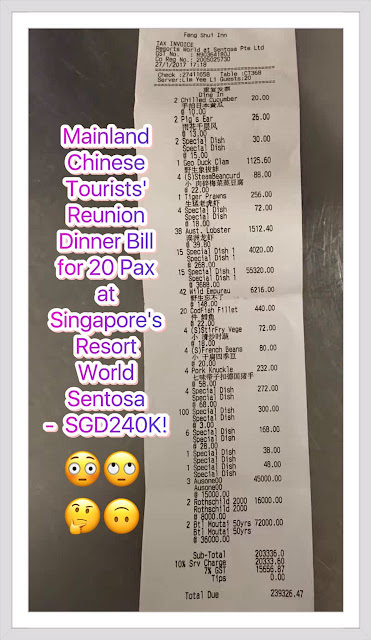 The above visual and two video clips were shared in the electronic social media Facebook and WhatsApp.

But it also turned out that the receipt may not be authentic as the video clip showing the S$240,000 reunion dinner for 20 pax is fake. Apparently the cost may have been inflated but the dinner did happen. (Read the asiaone news reproduced below for details.)

Whether the image and video clips are authentic or just a make up, there is a moral issue in life to the matter.

“You may be super rich and spend your wealth in whatever way you wish. But there is also an invaluable virtue - HUMBLENESS,” Gerakan Deputy Speaker Syed Abdul Razak Alsagoff said.

He said one may be super rich today, yet become a pauper the next day.

“Before showing off your wealth, just think for a moment of the poor and those who are starving and those who have starved to death in this world.

“Yes, enjoy your wealth as you wish but do it humbly. And indulge in charity as well,” he added.

“They indulge in excessive elaborateness of lifestyle, speech or action. This does not bode well for communities and societies,” he added.

Syed Razak said: “Surely right-thinking parents do not want their children to grow up and behave as such. Yes, grow up, be mature and work hard with honesty to accumulate your wealth.

“But, do not let that compromise your virtues and positive values in life as a human being.” 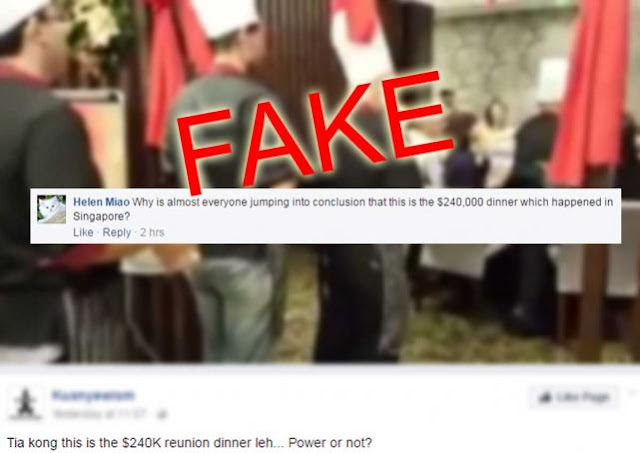 Alert netizens were quick to flag out that the restaurant in the video was serving Taiwanese cuisine, while Feng Shui Inn serves Cantonese cuisine.
Photo: Facebook screengrabs

A video which surfaced on social media purportedly shows a family feasting on the infamous $240,000 reunion meal at Feng Shui Inn restaurant at Resorts World Sentosa.

At first glance, the video has all the trappings of an opulent dinner that fits a $240,000 bill: A private room, a massive table, a wide lazy susan surrounding a huge steamer containing Chinese delicacies and seafood. And to make things more posh, waiters line up in rows to serve guests at the table while a dedicated restaurant staff can be heard describing the dishes through the sound system.

Explains the massive bill that came with the meal? Probably.

Except that the video is not related to Singapore's priciest meal - the latest of such deceptive news flooding the Facebook timelines of unsuspecting netizens, this time leeching on the buzz created by a photo of the $240,000 Feng Shui Inn receipt.

Alert netizens were quick to flag out that the restaurant in the video was serving Taiwanese cuisine, while Feng Shui Inn serves Cantonese cuisine. - asiaone"