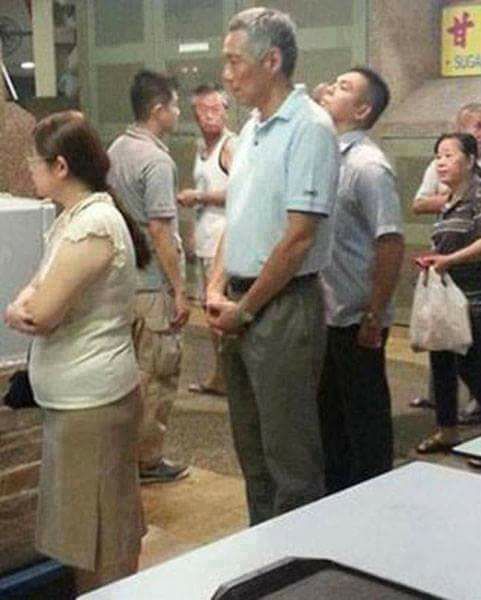 The above picture was shared in Facebook and is believed to have been snapped in Singapore.


And the posting was captioned that Singapore Prime Minister Lee Hsien Loong had queued up at an eatery or department store.

“Perhaps that is why the Lee family has been politically successful, having the majority’s confidence in Singapore’s governance.

“Singapore is today a developed nation and a global financial centre,” Gerakan Deputy Speaker Syed Abdul Razak Alsagoff said, adding that there have also been images of similar humbleness of other foreign politicians shared in social media networks.

He said perhaps it was time for Malaysian politicians to take a cue from Lee’s display of humbleness.

“Humbleness is a virtue and is perhaps also the key to success with humility being the quality of being humble. After all, humans are all born equal, no?”

Syed Razak, who is Gerakan’s nominee to contest N.37 Bukit Lanjan in the coming 14th General Election (GE14), said “there is no reason for Malaysian politicians to not feel safe without body guards and what else when they are not on official business”.

“Unless, we feel Malaysia is not safe?” he added.

Syed Razak said: “Politicians are elected by the rakyat (people) to serve them and country. They are not the boss.

“So, why must they surround themselves with body guards 24/7 and everywhere? And those pesky body guards are mostly bullies who do injustice to a politician’s image.

“They are super unfriendly, very physical, almost always going over board in discharging their duty. Go ask the media people and they will testify to this fact.”

And that is why I say: “I am Pek Moh (White Haired) Bukit Lanjan, ready to serve with honesty and commitment because the rakyat is the boss. They are my employers.”