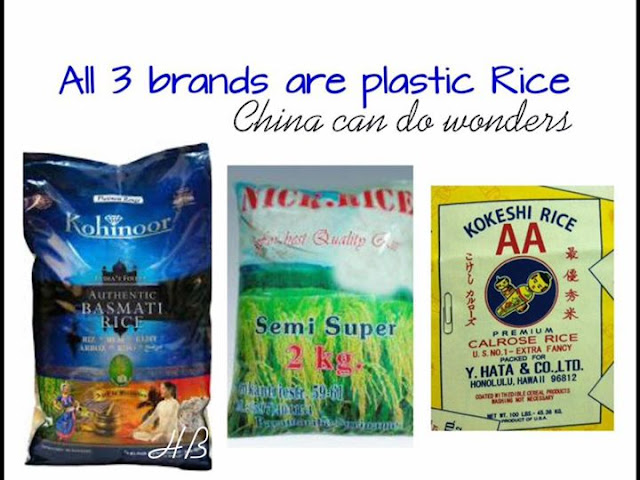 The above visual has been shared in electronic social media Facebook and WhatsApp for quite some time.

Are the claims and allegations true or false?


“It’s time for the authorities, like the health and domestic trade enforcement agencies, to keep Malaysians informed on the truth of the matter,” Gerakan Deputy Speaker Syed Abdul Razak Alsagoff said.

He said many Malaysians were worried about claims that “fake food” were being manufactured in China and exported to Malaysia.

“Are there really fake rice, fake eggs, fake whatever on the Malaysian shelves or in the market?” he asked.

Syed Razak, who is Gerakan’s nominee to contest N.37 Bukit Lanjan in the coming 14th General Election (GE14), said “if the claims and allegations are untrue, remaining silent is not an option for the authorities”.

“The authorities have a responsibility to educate and keep the  rakyat informed. The truth must prevail so that lies do not become fact over time,” he added.

Syed Razak said two news reports from Singapore has thrown some light into claims of fake or plastic rice.

However, consumers are still in the dark.

Are there fake or plastic rice in the market, or just counterfeit rice (meaning real rice packed under existing popular brands)?

The owner of the Singapore-registered trademark, who suspected that the imported rice infringed its trademark, had reported the shipment to the authorities.

On Thursday, customs officers intercepted five 20-foot containers that were carrying the shipment of more than 5,000 bags of rice weighing about 129 tonnes at the Pasir Panjang Terminal. The rice was seized after the packaging was found to have a similar trademark to the one registered in Singapore.

The trademark owner has confirmed the rice to be counterfeit and is in the process of taking legal action against the importer, Singapore Customs said.

‘Plastic rice’ in Singapore? No, it’s a hoax!
That message you got about 'plastic rice in Singapore' is fake! FairPrice has just filed a police report over these online rumours...

NTUC FairPrice in Singapore has lodged a police report over online rumours that its house brand 'Jasmine Fragrant Rice' was made of plastic.

The rumours, both in English and Chinese, spread like wild fire through WhatsApp and other social media platforms, starting Tuesday. So much so that, people got panicky and demanded refunds from FairPrice stores yesterday.
Plastic rice in Singapore?

This writer also got a WhatsApp message warning about the rice. Here is what it looked like: 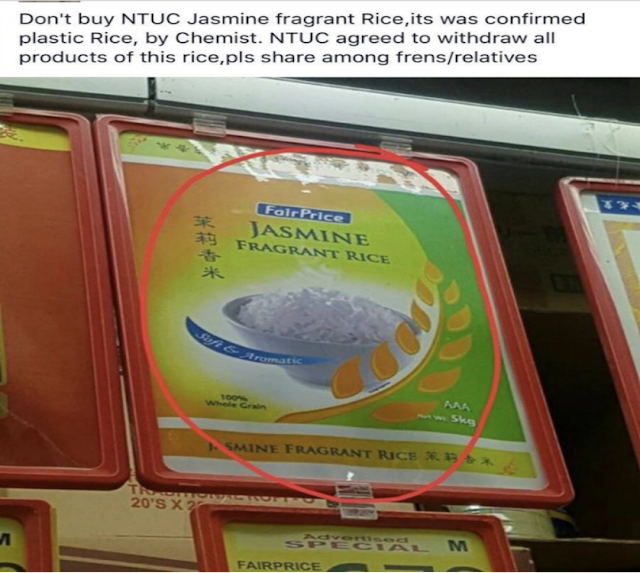 To add weight to the rumour, a video about plastic rice has also been doing the rounds:

According to The Straits Times and The New Paper, FairPrice corporate communications director Jonas Kor has been quoted as saying, "FairPrice would like to assure all our shoppers that our rice is safe for consumption, and has passed stringent safety checks by the authorities. We would like to advise the public not to further circulate this false information which may cause unnecessary public alarm."

The supermarket chain will put up notices at stores warning people about the rumour. It has also issued a statement on Facebook, denying this false claim. 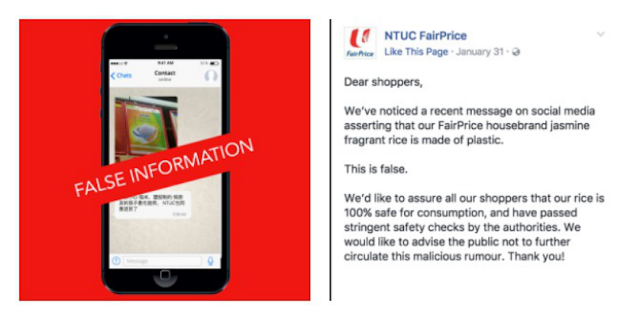 To clarify, FairPrice has been selling its house brand jasmine rice, sourced from Vietnam, since 2008.

Meanwhile, if you feel that the rice you bought is fake, you may approach the Agri-Food & Veterinary Authority (AVA) for further checks. The AVA regularly inspects and samples imported rice, and ensures that it complies with Singapore's stringent food safety and hygiene standards. The checks also include testing for toxins, pesticide residues and heavy metals. So far AVA has not detected any fake rice in Singapore.
How to detect plastic rice?

In this post-truth era, where everything from the food to eat, to the news we read, is fake, how can we make sure that basic food like the rice we eat is real, and not made out of plastic? These tips might help:

· The Water Test : Take a glass of water and drop a table spoon of raw rice into it and stir. Real rice would sink, plastic rice floats.

· The Fire Test: Take some rice and burn it. Knowing the smell of plastic, it wouldn't be hard to distinguish real from fake.

· Boiling Test: Closely observe rice while boiling it. Plastic rice would form a thick layer at the top of the pan.

· The Fungus Test : Real food rots, as simple as that. Leave boiled rice in a bottle for a few days. Real rice would grow mould, plastic remains unaffected.

· Hot Oil Test : Drop some rice into very hot oil. Plastic would definitely melt and stick together at the bottom of the pot.