If you believe in China’s Jack Ma and his competency in the digital world developments, then you cannot deny that Malaysia is on track to a quantum leap advance in digital world technology and its vast applications.

“I doubt Jack Ma’s words of praise are just an exercise of diplomacy. A man of his global ‘digital’ stature does not mince his words nor talk rubbish,” Gerakan Deputy Speaker Syed Abdul Razak Alsagoff said.

He said: “Whatever Jack Ma says, he has to make sure it is truthful. His global reputation is at stake. Do you think he will risk saying things that he will regret in the future?

“Alibaba is no doubt a global leader in digital technology applications for the everyday life of mankind. It is ever evolving and also disrupting the way businesses are being conducted all over the world.” (View the above video link for context.)

Syed Razak, who is Gerakan’s nominee to contest N.37 Bukit Lanjan in the coming 14th General Election (GE14), said the federal government “is on track to lead Malaysians and Malaysia into the future world of digital technology and its scores of applications”.

“This is the 21st Century era of digital technology which is fast evolving and even deemed disruptive. We can develop and embrace the changes but the federal government must also prepare Malaysians to adapt to the changes.

“And this entails policy changes to education and human capital building or rebuilding. Malaysia will need a vast pool of talented human capital supply to ensure robust economic growth,” he added.

Founder of Alibaba Group says he was impressed by Malaysia’s strength, tenacity and speed in implementing digital projects within three months. 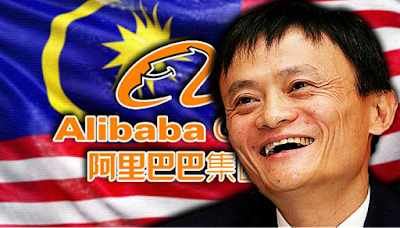 PETALING JAYA: Founder and executive chairman of the Alibaba Group, Jack Ma heaped praise on Malaysia recently for its speed in accomplishing its latest digital initiatives.

In an exclusive interview with Thailand’s leading English-language daily, The Nation, Ma said he was impressed by Malaysia’s strength, tenacity and speed in implementing digital projects.

“Honestly, we were shocked by Malaysia’s speed. I thought it was impossible for Malaysia but they came through,” he was quoted as saying.

Comparing the way things are done in Malaysia, Ma said Thailand needed a lot of improvement when it comes to implementing digital projects.

Ma, who is Asia’s richest person, made special mention of the personal attention by Prime Minister Najib Razak in pushing for the digital projects to be implemented, by visiting Ma at the Alibaba Group headquarters.

“The prime minister said, in three months, we will make this thing happen,” Ma said of the meeting which took place last November as part of Najib’s official trip to China.

“We thought it was almost impossible to make that happen in three months. It was a huge project, but they made it on time. They set up a great, strong team to follow up on the project.

“They opened up a customs office, inspection offices and made available the land that was required,” he told The Nation.

This is not the first time Ma had praised Malaysia for its speed in implementing the digital projects here.

On March 22, following the launch of the Digital Free Trade Zone (DFTZ), an e-hub jointly established by Alibaba Group and Malaysia Digital Economy Corp, Ma said it took only 10 minutes for him and Najib to agree on introducing the DFTZ when they met in China in November last year.

“My team and I thought, is four months possible? We have been discussing it with many European and Asean countries. But Malaysia is very business-friendly and much more efficient than I thought,” Ma was reported to have said.

Ma was also appointed as the Malaysian government’s digital economy adviser in March.

With the digital projects implemented in Malaysia, it made the country Alibaba’s first e-WTP (World Trade Platform) hub in the region.

In addition to Malaysia, Ma also cited Pakistan, the Philippines, Vietnam and Cambodia as Asian countries on his group’s special attention list to become e-WTP centres.

It is still too early to quantify the impact of the trade and logistics hub as it is only expected to be launched by end-2019, they say. 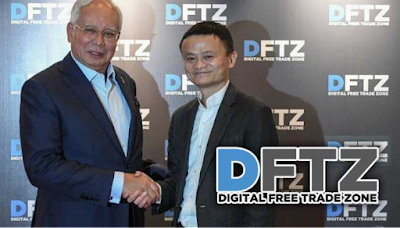 This is the view of economic analysts from AmInvestment Bank and HLIB Research, according to a report in The Sun daily.

The idea behind the hub is to lower trade barriers and expand the market for small and medium industries.

At the launch, MAHB and the logistics arm of Alibaba, Cainiao Network, signed a memorandum of understanding for the development of a regional electronic commerce and logistics hub in the KLIA Aeropolis by the end of 2019, with operations to be led by Cainiao and Lazada.

The Sun daily reported AmInvestment as saying it believed the DFTZ would boost the long-term outlook of Malaysia’s logistics companies due to the anticipated increase in the volume of goods moving through the zone.

In a separate note, HLIB Research also said the MoU was good for the MAHB. “We believe the initiative will attract strong demands from logistics players (domestic and international) for shares of land development earmarked under KLIA Aeropolis – Air Cargo and Logistics,” it said.

Despite the positive signs, however, AmInvestment maintained its “neutral” call on the transport and logistics sector.

“Although we believe the set-up of DFTZ will be positive on the long-term growth of MAHB and the overall logistics sector in the country, we believe it is still too early to quantify the impact of DTFZ, as it is only expected to be launched by end-2019,” it said.

The Star daily quoted Transport Minister Liow Tiong Lai as saying the initial phase of the DFTZ would be located on the 17.5ha site of the former low-cost carrier terminal. It will have a centralised customs clearance, warehousing and e-fulfilment facilities.

“When DFTZ is fully developed by 2025, the e-fulfilment hub is anticipated to handle and move up to US$65 billion (RM287 billion) worth of goods around the Asean region.”

The DFTZ will facilitate cross-border movement of goods as well as ensure seamless air connectivity, the report said.

“It could deliver packages within 72 hours to Asean countries through the good air connectivity at KLIA and sea connectivity via Port Klang,” Liow was quoted as saying.

Ma said Malaysia was the first to take him up on his vision when he met Najib last year.

“People say ‘Why Malaysia?’ Of course, four months ago when I sat in Beijing… I did not think we could make it happen, but we made it. Malaysia is very business-friendly. It’s efficient. It’s much more efficient than I thought,” Ma was quoted as saying."