They say the early bird catches the worm. And that is why Malaysia is headed in the right direction by aggressively stepping up socio-economic and political ties with China.

Do Malaysians and Malaysia really want to continue to trust and rely on the US for help and economic development?

“That question must be truthfully and honestly answered by political doomsayers who continue to criticise efforts to attract investments from China,” Syed Abdul Razak Alsagoff said.

He said history had clearly shown that the US had been behind all the wars being waged all over the world since World War II (WWII).

“And, the attack and invasion of Iraq is the clearest evidence of the US waging war and occupation based on their own selfish agenda, not facts! Where are all the weapons of mass destruction that the US claimed had been hidden by Saddam Hussein?”

“Can you really rely on or trust the White Supremacy?” he asked.

He said the Pew Research Center had in a recent report found that much of the world thinks China is catching up to the US and that they had little faith in US President Donald Trump. 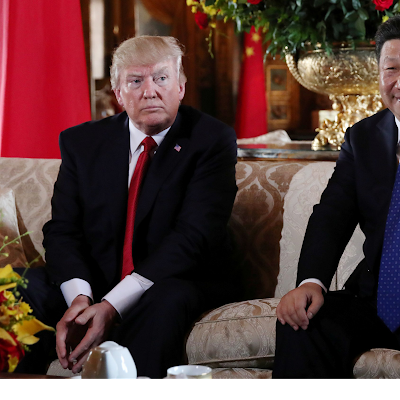 China’s economic might is catching up to the United States — or is seen to be catching up.

That’s according to a new report from the Pew Research Center, which released results of a 38-nation survey Thursday afternoon.

While the majority of those polled still correctly believe the United States is the world’s biggest economy, 12 nations — including Canada, Russia, and most of western Europe — believe China has the largest economy in the world.

Pew detected a dramatic shift; only six nations said Beijing possessed the world’s strongest economy when the question was asked between 2014 and 2016. Since then, the number of countries that view the United States as playing second fiddle to China has doubled.

And more striking is the change that’s taken place in just the past year: Canada, the U.K., Germany, Spain, and Italy all went from seeing America as the biggest player to viewing China as the top dog.

In Asia, where countries are closer to China’s brand of geo-economic big-footing, the story is quite a bit different. A host of U.S. allies and partners, including Japan, South Korea, the Philippines, Indonesia, Vietnam, and India all see the United States as the global economic powerhouse. Notably, there’s one regional exception: Australia now believes China is the biggest player.

Pew attributes the rise of China’s standing to the aftermath of the Great Recession. “While the United States and other relatively wealthy Western nations have slowly bounced back from the crisis, economic growth rates have been low compared with those of China, India and other emerging economies,” the report said.

This change in perception makes some sense, given President Donald Trump’s retreat from the global stage.

He’s killed the Trans Pacific Partnership, a massive trade deal meant to create an Asian free trade zone. He’s pulled back on a potential trade deal with Europe. And he’s renegotiating NAFTA with Mexico and Canada.

But given China’s deep-seated economic woes — rising labor costs; crushing corporate and government debt; woefully inefficient state firms; rampant pollution; a dearth of arable land and clean water; and a shrinking workforce — many experts are a lot more worried about a Chinese slowdown than about Beijing stealing the global economic crown.

The poll, taken among nearly 42,000 respondents, also offers an eloquent view of how the world sees great power leaders.

Some 53 percent figure Chinese President Xi Jinping will do the wrong thing in international affairs; Russian president Vladimir Putin sours 59 percent of the population. But fully 74 percent of respondents said they had little or no confidence in Trump.

The only world leader to receive positive marks in this category is German Chancellor Angela Merkel, with 42 percent expressing confidence in her.

The overall standing of the United States on the world stage is also in decline. From 2014 to 2016, 64 percent of those polled held a favorable view of the United States. That’s down to 49 percent in 2017. The view of China remained relatively flat, dropping from 50 to 47 percent.

Ed Goldberg, a professor at the NYU Center for Global Affairs, said that Trump’s rise on the world stage has emboldened China, as reflected in the Pew results. “Xi is seen as the grownup in the room,” Goldberg told FP. - Business Insider (Military & Defense)"