BUKIT LANJAN: When the mata mata (cop) is more powerful than an arrogant ‘Datuk Seri’

July 13, 2017
BUKIT LANJAN: When the mata mata (cop) is more powerful than an arrogant ‘Datuk Seri’

Syabas (Congratulations) to the mata mata (cop) who kept his cool when confronted by an abusive and arrogant ‘Datuk Seri’ businessman.

The abusive and arrogant ‘Datuk Seri’ eventually got what he deserved - ARRESTED! Padan muka (serves you right) ‘Datuk Seri’!

“Of late, Datuks and others with honorific titles have been hitting the news headlines regularly for all the wrong reasons in Malaysia,” Gerakan Deputy Speaker Syed Abdul Razak Alsagoff said.

“They misbehave in public and some are law breakers or are even involved in criminal activities,” he added.

“What’s so honourable about such characters? Who do they think they are? Are they above the law?

“In the first place, how on earth did such abusive and arrogant characters receive their honorific titles? They are a disgrace and an insult to state honorifics,” he added.

Syed Razak, who is Gerakan’s nominee to contest N.37 Bukit Lanjan in the coming 14th General Election (GE14), said “such ‘baboons’ should be stripped of their titles immediately for degrading state honours”.

He said such displays of arrogance and a lack of respect for the country’s laws simply showed that they “lack proper education, civil behaviour and humbleness”.

Here are the details of what happened at the Kuala Lumpur traffic police station as posted by The Star Online: 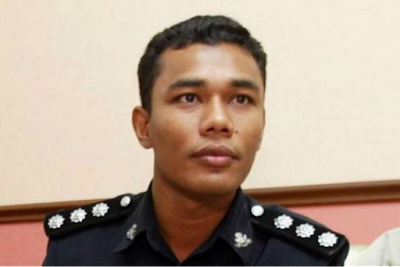 Dang Wangi OCPD Asst Comm Mohd Sukri Kaman (pic) said that the Datuk Seri has been remanded for one day.

The 45-year-old businessman had gone to the station after a friend complained that he was stopped by police over suspicions of drunk driving.

He came up to the policemen on duty, identified himself as a Datuk Seri and expressed his dissatisfaction over the "police treatment" of his friend.

After being told to allow police officers to perform their duties, the man lost his temper and started shouting profanities.

The police repeatedly warned the suspect to stop his outburst but it fell on deaf ears.

The man was then detained when he refused to heed their warnings.

The case is being investigated under Section 186 of the Penal Code for obstructing a public servant from discharging their duties."