BUKIT LANJAN: Gangsters, mob are now the law in Malaysia?

https://youtu.be/w9rNGW-EAvE (VIDEO: Gangsters, mob are now the law in Malaysia?)

The above video clip says it all about what is the law in Malaysia today.

And who is to blame for such gangster-like public behaviour? Who has given them the encouragement and confidence to behave as such?


“Many Malaysians have plenty of views on such public matters of concern. But what are the authorities, especially the police, doing about it?” Gerakan Deputy Speaker Syed Abdul Razak Alsagoff said.

He said the video clip was shot at the scene of an accident.

“If there is an accident, let the police handle it, right? But no. Gangster-like individuals and mob take over the law at the scene,” he added.

Syed Razak said whether the car driver was drunk or not, “it is for the police to investigate and act accordingly within the law”.

“Definitely not the mob way of the ‘gangster’ and his cohorts. The police must, therefore, act against those who took the law into their own hands.

“They are guilty of assault and threatening the life of the man involved in a car accident. If they are allowed to get away scot-free without any police action, then the police force is guilty of encouraging such mob and gangster-like behaviour,” he added. 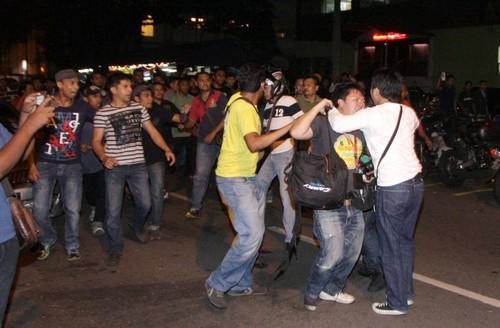 Syed Razak, who is Gerakan’s nominee to contest N.37 Bukit Lanjan in the coming 14th General Election (GE14), said for the sake of upholding public law and order and civil behaviour, “I urge the police to investigate and act immediately”.

“The video clip contains all the evidence needed to charge those who took the law in their own hands,” he added.