There’s something not right about petrol and diesel prices.

Why is diesel more expensive than petrol (RON95)?

“Diesel used to be very much cheaper than petrol. And that was why owners of diesel vehicles had to pay much higher road tax than petrol-engine cars,” Gerakan Deputy Speaker Syed Abdul Razak Alsagoff.

Syed Razak, who is Gerakan’s nominee to contest N.37 Bukit Lanjan in the coming 14th General Election (GE14), urged the federal government to look into lowering the price of diesel for public transport.

“If need be, diesel should at least be subsidised for public transport vehicles like taxis, buses and lorries. It is definitely time for the federal government to consider this to help lower the prices of goods and services,” he added.

Other fuels like kerosene and cooking gas should also be considered for subsidy for commercial use, like restaurants and hawkers, to help lower prices of goods and services to fight inflation. 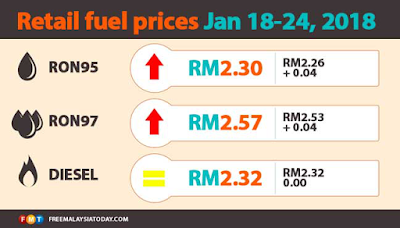 The price of diesel remains unchanged at RM2.32 per litre.

The weekly fuel pricing mechanism came into effect on March 29 last year. Prices of petrol and diesel were placed on a managed monthly float system since Dec 1, 2014, following the removal of fuel subsidies.