BUKIT LANJAN: Parents must start ‘thinking out of the box’ for their children to acquire the right working skills

BUKIT LANJAN: Parents must start ‘thinking out of the box’ for their children to acquire the right working skills

It is heartening to read news that Mamee is ready to use RM2 million worth of robotics technology for its manufacturing line.

Mamee, a Malaysian food manufacturer, had gone through a trial period using the technology and will be robotics fully operational next month, starting with the production of instant noodles right up to the packaging stage.

He said although new technologies could be disruptive in many ways, “it is the reality that we all have to face”.

“Yes. Robotics will reduce jobs and workforce. But factory workers can also adapt and upgrade themselves with new skills related to robotics to remain employable,” he added.

Syed Razak, who is Gerakan’s nominee to contest N.37 Bukit Lanjan in the coming 14th General Election (GE14), said the 21st Century digital world or era necessitates parents to “start thinking out of the box” when planning for their children’s education.

“There are already too many doctors and lawyers in Malaysia. That’s because the majority of parents, especially the Chinese, continue to only hope for their children to grow up to be doctors or lawyers.

“This is backward thinking. There are more skills to learn in the digital world than in the 20th Century. As long as our children are educated and learn or acquire the right working skills, their future will be bright,” he added.

This is national news agency Bernama’s report on Mamee as posted by The Star Online: 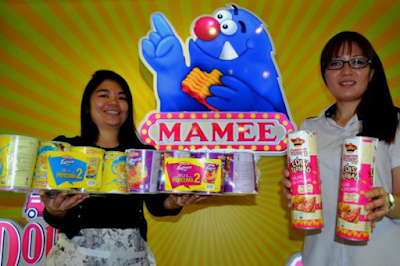 Group chief operating officer Datuk Pang Tee Nam said the use of the technology is in line with the industry’s requirement to safeguard quality of products, cleanliness and food safety, thus enabling the company to remain competitive in the challenging market.

“We have gone through a trial period using the technology before it is being be fully operational next month, starting with the production of instant noodles right up to the packaging stage.

“This is the first time we are using this technology, and we expect that it will boost the production of instant cup noodles and minimising reliance on manpower,” he told reporters after receiving Melaka Unity and Consumer Affairs Committee Chairman Datuk Lai Meng Chong at the company’s factory in Ayer Keroh here, today.

He said the technology led to a leaner manpower of between two and four workers per production line from between eight and 10 workers with the conventional method.

Meanwhile, he said the company’s joint-venture with South Korea’s Shinsegae Food to produce halal instant noodles, sauces and flavourings, involving an investment worth RM50mil is expected to be completed this year.

“The collaboration will be able to boost production and enable the company to penetrate the South Korean market,” he said.