Last year’s average inflation rate was about 4%. The estimated average wage growth was only 1.3%!

It doesn’t take much nor the brain of a rocket scientist for anyone to figure out the woes of Malaysian workers.

“The global economy is expected to continue to be sluggish for another year or two. Young Malaysian workers must brace themselves for the worse,” Gerakan Deputy Speaker Syed Abdul Razak Alsagoff said.

He said according to the Employees Provident Fund (EPF) statistics, only those aged 35 and above benefited from up to 4% wage growth.

“This means the best reward Malaysian workers could achieve from employers is to counter the 4% inflation rate,” he added.

Syed Razak, who is Gerakan’s nominee to contest N.37 Bukit Lanjan in the coming 14th General Election (GE14), said employers had probably rewarded those aged 35 and above for their experience and competency in their work.

“Young workers must, therefore, plan a prudent life. For those starting new families, it will indeed be a very challenging struggle. Persevere until the good times return,” he added.

The following was posted by online news portal The Malaysian Insight (TMI): 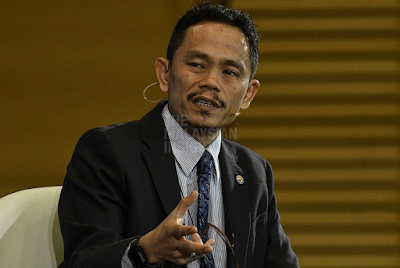 Employees Provident Fund senior official Nurhisham Hussein speaking at the Malaysian Income Distribution in a Global Context forum today. He says wage growth is quite poor among the middle 40% of Malaysians, depending on their age. – The Malaysian Insight pic by Nazir Sufari, January 18, 2018.

WAGES for workers above 35 grew by 4% last year, said an Employees Provident Fund (EPF) senior official, even as many complained that salary growth stagnated in 2017.

However, the fund’s economies and capital markets general manager, Nurhisham Hussein, said this trend was not repeated among employees younger than 35.

“We are still trying to find out what is driving this, as the data is very recent,” he told the audience at the Malaysian Income Distribution in a Global Context forum, organised by the Khazanah Research Institute (KRI), today.

“What we are seeing is, wages are increasing, but not across the board.”

EPF, which takes contributions from private sector workers, is seeing salary increases for the bottom 40% (B40) of Malaysians and the top 20% (T20) of wage earners.

“But, wage growth is quite poor among the M40 (middle 40%), depending on their age,” said Nurhisham.

The slow rise in wages compared with the inflation rate, which averaged about 4% last year, was a common complaint among Malaysians in 2017.

Economist Azrul Azwar Tajudin predicted that the trend of wage growth not keeping up with the rise in the prices of goods would continue this year.” 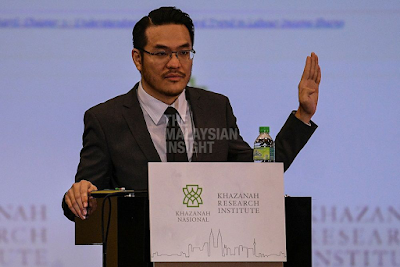 Khazanah Research Institute head of research Dr Allen Ng speaking at the Malaysian Income Distribution in a Global Context forum today. He says one of the main reasons for the decreasing inequality in wages is the steady rise in incomes for the bottom 40% and middle 40% groups. – The Malaysian Insight pic by Nazir Sufari, January 18, 2018.

Nurhisham said the rise in wages did not automatically translate into more social mobility for workers.

Although the average Malaysian had a good chance of doing better than their parents, he said, it was still highly possible for them to stay in the same socio-economic class throughout their lives.

“Mobility within a generation is poor. For instance, if you are a B40 worker, there is a 50% chance that you will continue to remain in that class.

“If you are a T20 earner, there is a 60% chance that you will stay within that income group. So, where you start off matters.”

Wage growth is the common theme at the forum, which aims to analyse Malaysia’s efforts in reducing income inequality, a key policy of the government.

Studies by KRI have shown that inequality, as measured by the Gini coefficient, has decreased from 1970 to 2016.

He said one of the main reasons for the decreasing inequality was the steady rise in incomes for the B40 and M40 groups. – January 18, 2018."