BUKIT LANJAN: TTx is a burden to Malaysians, federal government urged to scrap it

BUKIT LANJAN: TTx is a burden to Malaysians, federal government urged to scrap it
The federal government’s scheduled imposition of Tourism Tax (TTx) on Aug 1, 2017 (now reportedly pushed forward to July 1, 2017), is a grossly unnecessary burden on Malaysians.


Malaysians are already paying income tax, Goods and Services Tax (GST), and whatever other taxes.

“So, why must they be subjected to TTx?” Gerakan Deputy Speaker Syed Abdul Razak Alsagoff said.

“I have no objections to the federal government to impose TTx on genuine foreign tourists and tour groups. But why burden the already cash-strapped and stressed out Malaysians?

“Many Malaysians who need to stay in hotels are not tourists. They are either businessmen, salesmen and even those who are accompanying their loved ones who are in need of medical treatment in cities.

“Postpone the implementation of TTx to show the federal government is responsive and caring towards the woes of the rakyat (people),” he added.

Syed Razak, who is Gerakan’s nominee to contest N.37 Bukit Lanjan in the coming 14th General Election (GE14), said he disagreed with Malaysian Association of Tour & Travel Agents (Matta) president Hamzah Rahmat that the tourism industry would be affected by TTx.

“Tourists can always afford to pay such taxes. They go on tours because they have spare cash to go for a break. So, a slight increase in costs will not dissuade them from travelling.

“However, salesmen, businessmen, the sick and even students need to travel and stay in hotels for valid reasons. They are absolutely not tourists,” he added.

Here’s a news report posted by The Star Online on the imposition of TTx on Aug 1, 2017: 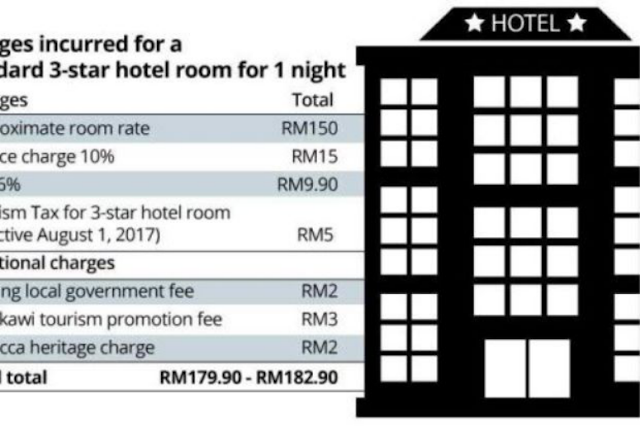 PETALING JAYA: The impending Tourism Tax (TTx) will not only affect domestic tourists, but will be an extra burden for Malaysians who have to travel for other purposes such as studies, medical treatments and family obligations.

Malaysian Association of Tour & Travel Agents (Matta) president Datuk Hamzah Rahmat said the TTx that will be implemented on August 1, 2017, is coming at a bad time as Malaysians are already struggling economically.

"Those people who have to travel will have to travel and right now they are being forced to pay for it (TTx). They would be business travellers or students, or sick and have to travel for treatment. It doesn’t just affect tourists," he said on Wednesday.

Hamzah suggests for the TTx to be imposed on 4-star and 5-star hotels first and defer the implementation on lower-rated hotels, hostels and accommodation premises to a later date.

“There are already a lot of taxes and this new tax is so abrupt, especially for the ordinary man on the street. I’m not saying that this tax shouldn't be imposed at all, but now is not the time for it,” he said.

The Penang, Langkawi and Malacca state governments are already incurring charges of between RM2 to RM9 for hotel guests depending on the type of hotel the guest is staying in.

Passed as part of the Tourism Tax Bill 2017, TTx will see local and international tourists paying a levy to the operators of accommodation premises.

The tax rate is fixed and charged on a per-room, per-night basis.

Engineer Lim Chze Hong, 33, who travels twice a month for work said TTx is an unnecessary burden for Malaysians and should only be imposed on foreign tourists.

"It is an extra burden on top of the funds we need to spend to travel outstation for work, regardless if the rooms are paid by the company or not. If this is a ‘tourism tax’, then they should not impose the tax on anyone who books a room using their MyKad,” he said.

Meanwhile, 41-year-old writer Vivan Chong said that she wouldn't mind paying the tax if the revenue is used to develop the local tourism industry.

"The rates are not a burden money-wise but I think the real question is, who is this supposed to benefit in the first place and why are we being taxed for already contributing to the economy by travelling locally," she added.

Tourism and Culture Minister Datuk Seri Nazri Aziz had previously been reported saying that the tax revenue would be spent mainly on tourism and infrastructure development throughout the country.

He said the tax was necessary because the Government needed to mitigate uncertainties in the oil-and-gas industry, adding that the Government was expected to collect about RM800mil annually through the new tax."