Nurturing a hardworking workforce striving its best to raise productivity is not the right way to push for higher growth.

It means having the right quality of human capital to propel Malaysia’s growth.

To get the right human capital supply, there are only two crucial factors - education and training.

“It is plain common sense. Malaysians must be educated, trained and groomed for the right skills to help contribute to nation-building effectively.

“It goes to say, you train monkeys, you get peanut productivity. Our education and training must therefore be reviewed and totally overhauled to suit the needs and times of the current high-technology era,” Gerakan Deputy Speaker Syed Abdul Razak Alsagoff said.

“I have reiterated many times before in this blog. Malaysia cannot expect to achieve developed nation status or a high-income nation just with the ‘business as usual’ attitude and mentality.

“As a multi-racial multi-religious nation, it is an extremely daunting and sensitive task. Admit it. There must be political will from the government of the day to really steer Malaysians and Malaysia ahead.

“We need to retain and nurture the best brains and talents to produce the right and competent-skilled human capital supply to ensure Malaysia’s economic growth.

“Mediocrity is simply not enough to help bring Malaysia to greater heights,” he added.

Syed Razak, who is Gerakan’s nominee to contest N.37 Bukit Lanjan in the coming 14th General Election (GE14), said the federal government needed to seriously sit down, brainstorm and find the political will to “do what is right for Malaysians and Malaysia”.

Here are two online news reports, one from Free Malaysia Today and another The Malaysian Insight, for you to chew on:
"Economists: Malaysia must push harder for growth in productivity
FMT Reporters
| June 5, 2017

They say despite some growth in this area, Malaysia still lags behind countries such as Singapore, South Korea and Japan. 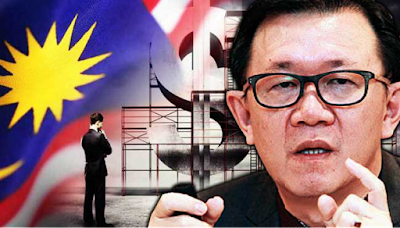 PETALING JAYA: Economists say Malaysia must push harder to raise productivity in order to realise its goal of becoming a high-income nation.

“Though Malaysia’s labour productivity growth inched to 3.5% in 2016 from 3.4% in 2015, it was far from satisfactory as this marked two successive years of slowing growth from 3.7% achieved in 2013,” he told The Edge Financial Daily.

He added that Malaysia’s average productivity growth over the past decade had been 2%, pointing out that it still lagged behind other developed countries such as Singapore, South Korea and Japan.

Yeah, who is professor of economics at Sunway University Business School, told The Edge that it would be challenging to close the productivity gap between Malaysia and more advanced economies.

“We have invested more than other countries in terms of developing our human capital, but that has not translated into much higher productivity levels. It’s not in line with what we have invested,” he was quoted as saying.

Yeah cited the higher proportion of low and semi-skilled workers in the labour force and the current technology levels as some of the underlying factors.

According to the 11th Malaysia Plan, the government aims to register an average annual growth of 3.7%. - FMT


The Malaysian economic indicator that is raising red flags
Sheridan Mahavera
Published on 30 May 2017 9:54AM


OF all the statistics trotted out to show the health of the economy, one indicator is causing some concern among economists, who said it spells trouble for every Malaysian over the long term.

The current account balance is a gauge for the state of the economy and if it goes into a deficit for an extended period, it affects everything from wages to the price of vegetables.

Malaysia’s current account balance still shows a surplus but the bad news is that it has been declining steadily from 2014.

Economist Ali Salman said that the surplus dropped by more than half or 57.75%, from the fourth quarter of 2016 to the first quarter of this year.

If this decline is not addressed, it will mean years of tepid growth and hit the pockets of ordinary Malaysians. Economists said these are among the impacts of a declining surplus:

* It makes it harder to create new jobs and sources of income for citizens thus, curbing their spending power.

* It saps investor confidence, which can then weaken the ringgit.

* A weak ringgit would make imports, such as food and goods, more expensive and drive up supermarket prices.

* The worst part is that the above factors can compound and feed off each other, thus, leading to slower overall growth.

“(This then) becomes a vicious cycle of poor growth and rising inflation which can lead to social unrest,” said economist Ramon Navaratnam.

According to the website Investopedia, a country’s current account consists of its trade balance (exports minus imports), income from abroad and net current transfers, including remittances by foreign workers.

“The current account balance decreased by about 57.75% from the fourth quarter of 2016 to the first quarter of 2017, with a total loss of RM 7.2 billion,” said Ali, who is IDEAS head of research.

According to the Malaysian Institute of Economic Research (MIER), the country’s current account surplus stood at RM48 billion for 2014. It declined to RM34 billion in 2015 and RM25 billion in 2016.

“Weak global commodity prices of palm oil, natural gas and crude oil as well as deteriorating competitiveness in its manufacturing base have weakened export performance,” he said.

The goods account decreased by 18.93% from the previous quarter, while the services account slipped by 15.29%, he said.

The country’s primary income also went down by 7.19% compared with the previous quarter and is already registering a deficit.

Although overall, Malaysia is still exporting more than it is importing, said Zakariah, this trade surplus is deteriorating.

Given that Malaysia is a maritime country, a big portion of the services account comprises of shipping services but this is where the country falters.

“Less than one-third of the ships plying the Malacca Straits used the services of Malaysian ports. Similarly, only one-tenth of our volume in international trade was shipped by Malaysian ocean liners.”

Combined, Malaysia still records a surplus in its goods and services accounts, said Zakariah. But this declining surplus is “a worrisome trend”.

The other “worrisome trend” is the large number of foreign workers who make up one-third of the labour force, said Zakariah.

When they remit what they earn here to their home countries, this drives down the country’s primary income account, which currently records a deficit.

“This deficit is a reflection of the structural weaknesses in the maritime industry and labour market.”

In the long run, a current account that slips into negative territory will sap economic vitality, said Ali of IDEAS.

“Foreign investors will be demotivated to invest in Malaysia and demand weakens for the country’s assets, including government bonds.

“As foreign investors withdraw investment, the national currency will lose value relative to other currencies. Ultimately, there will be capital flight from Malaysia.”

It is still not too late to prevent this slide as the declining surplus is a sign that certain structural weaknesses in the economy need to be fixed, said Zakariah.

This includes cutting the dependence on unskilled foreign labour and strengthening the maritime services industry.

“Addressing these will certainly bring a rewarding and positive impact on the creation of high-skilled jobs,” said Zakariah. – May 30, 2017."