BUKIT LANJAN: Has the ‘kurang ajar’ Kim gone too far?

The leader of the rogue nation claims he is just conducting missile tests but firing a missile over a sovereign state (Japan) is surely an aggression.

“Whatever little sympathy the rest of the world had for North Koreans, if any, has vanished with Kim’s latest mad provocation,” Gerakan Deputy Speaker Syed Abdul Razak Alsagoff said.

He said Kim and North Korea had gone too far “this time” and Japan and the US “are unlikely to take it lightly”.

“You can test fire missiles and rockets by shooting into the sea or ocean. But not let fly missiles over the air space of a sovereign state.

“That’s definitely a threat to a country’s security and safety. Kim and North Korea must be made to understand this,” he added.

Syed Razak, who is Gerakan’s nominee to contest N.37 Bukit Lanjan in the coming 14th General Election (GE14), said “Kim is acting as if he is invincible and untouchable, and that’s a grave mistake”.

“He is playing with fire and is risking the safety of his own people or citizens and his country if the global community decides to retaliate to put a stop to such madness.

“No sane leader of a country will want to risk the lives of his people, unless he is ignorant and extremely arrogant,” he added.

Syed Razak said Kim should be warned that “there is a limit to a sovereign state and global tolerance to his antics of threats and aggression”.

“You cross the line and you pay dearly with your lives,” he added.

This is international news agency Reuters’ reports on Kim’s latest madness as posted by The Star Online:


TOKYO/SEOUL (Reuters) - North Korea fired a missile early on Tuesday that flew over Japan and landed in the Pacific waters off the northern region of Hokkaido, South Korea and Japan said, in a sharp escalation of tensions on the Korean peninsula.

The last North Korean projectile to fly over Japan was in 2009. The United States, Japan and South Korea considered that launch to have been a ballistic missile test while North Korea said it was a rocket carrying a communications satellite into orbit.

South Korea's military said the latest missile was launched from the Sunan region near the North Korean capital Pyongyang just before 6 a.m. (2100 GMT Monday) and flew 2,700 km (1,678 miles), reaching the altitude of about 550 km.

"It is an unprecedented, serious and grave threat to our nation," Suga told a briefing, adding the government had protested the move in the strongest terms.

Suga said the launch was a clear violation of United Nations resolutions and Japan will work closely with the United States, South Korea and other concerned nations on a response, he said.

Japanese public broadcaster NHK reported the missile broke into three pieces and fell into the waters off Hokkaido.

The Japanese military did not attempt to shoot down the missile, which passed over Japanese territory around 6:06 a.m. time (2106 GMT).

The Pentagon confirmed the missile flew over Japan but did not pose a threat to North America and said it was gathering further information.

The launch marks a sharp escalation in tensions over Pyongyang's pursuit of nuclear weapons and ballistic missiles in defiance of U.N. sanctions.

North Korean leader Kim Jong Un earlier this month threatened to fire missiles into the sea near the U.S. Pacific territory of Guam and U.S. President Donald Trump warned Pyongyang would face "fire and fury" if it threatened the United States.

(Reporting by Jack Kim and Soyoung Kim in Seoul and William Mallard, Malcolm Foster and Linda Sieg in Tokyo, Idrees Ali and Matt Spetalnick in Washington; Editing by Lincoln Feast) 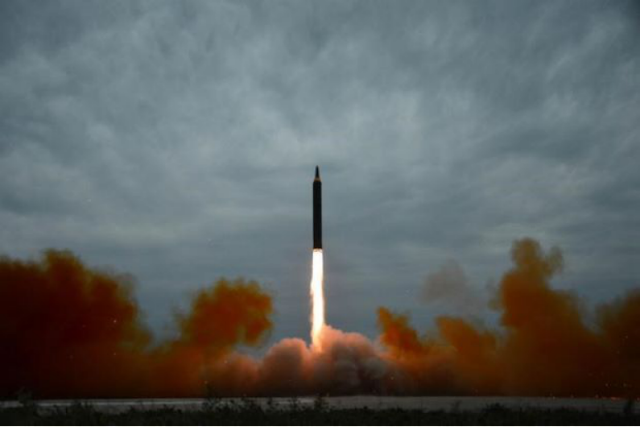 WASHINGTON (Reuters) - North Korea's firing of a ballistic missile over Japan could increase pressure on Washington to consider shooting down future test launches, although there is no guarantee of success and U.S. officials are wary of a dangerous escalation with Pyongyang.

More attention is likely to focus on the prospects for intercepting a missile in flight after North Korea on Tuesday conducted one of its boldest missile tests in years, one government official said.

Such a decision would not be taken lightly given tensions over North Korea’s nuclear and missile programs.

And while President Donald Trump has repeatedly vowed that "all options are on the table", there has been no sign of any quick policy shift in Washington towards direct U.S. military action.

But Pyongyang's launch of an intermediate-range Hwasong-12 missile over Japan's northern Hokkaido island underscored how Trump's tough rhetoric, pursuit of sanctions and occasional shows of military force around the Korean peninsula have done little to deter North Korea's leader.

"Kim Jong Un has chosen to thumb his nose at the Americans and Japanese by conducting this test," said David Shear, former U.S. assistant secretary of defence for East Asia.

U.S. Defense Secretary Jim Mattis has already pledged that the military would shoot down any missile it deemed a danger to U.S. or allied territory.

What is unclear is whether Washington would be prepared to use its multi-layered missile defence systems to intercept a missile like the one that overflew Japan but never directly threatened its territory.

Doing so would essentially be a U.S. show of force rather than an act of self-defence.

"I would think that in government deliberations that would likely be one of the options out on the table," Shear said.

Some analysts say there is a danger that North Korea would see it as an act of war and retaliate militarily with potentially devastating consequences for South Korea and Japan.

(For a graphic on North Korean missile trajectories and ranges, click http://tmsnrt.rs/2hIzZHG)

Experts say there is no guarantee that U.S. missile defence systems, including Aegis ballistic missile defence ships in the region and Terminal High Altitude Area Defense (THAAD) systems based in Guam and South Korea, would hit their target, despite recent successful tests.

A failed attempt would be an embarrassment to the United States and could embolden North Korea, which this year has already conducted two tests of an intercontinental ballistic missile believed capable of hitting the U.S. mainland.

The United States has spent $40 billion over 18 years on research and development into missile defence systems but they have never been put into operation under wartime conditions.

Mattis this month expressed confidence the U.S. military could intercept a missile fired by North Korea if it was headed to Guam, after North Korea said it was developing a plan to launch four intermediate range missiles to land near the U.S. territory.

If North Korea fired at the United States, the situation could quickly escalate to war, Mattis said.

(For a graphic on U.S. missile defense systems, click http://tmsnrt.rs/2gopCZb)

Not everyone is convinced the U.S. military can defend against North Korea's growing missile capability.

Some experts caution that U.S. missile defences are now geared to shooting down one, or perhaps a small number, of incoming missiles. If North Korea's technology and production keep advancing, U.S. defences could be overwhelmed.

"If a shootdown fails, it would be embarrassing, though not terribly surprising," said Michael Elleman, a missile expert at the 38 North think tank in Washington.

"Missile defence does not provide a shield that protects against missiles. Rather, it is like air defence; it is designed to minimize the damage an adversary can inflict," he said.

One U.S. official said the military would be especially cautious about shooting down a North Korean missile that did not pose a direct threat because of the risk of civilian casualties if it were intercepted over Japan or South Korea, as well as difficulty in determining how Pyongyang might retaliate. The official spoke on condition of anonymity.

U.S. military and intelligence officials warn North Korea could unleash a devastating barrage of missiles and artillery on Seoul and U.S. bases in South Korea in response to any military attack.

Targeting of a North Korean missile in flight that did not endanger the United States or its allies could also raise legal questions. U.N. Security Council resolutions that ban Pyongyang’s ballistic missile programs do not explicitly authorize such actions.

Japan also faces questions over the legality of shooting down missiles in its airspace but not aimed at Japan. Under legislation passed in 2015, Tokyo can exercise a limited right of collective self-defence, or militarily aiding an ally under attack, if it judges the threat to Japan as "existential"."