Those are damning and grave accusations for a country to make against another country, and a neighbouring one.

“Many will be quick to accuse the Malaysian enforcement authorities of spending too little time and attention on the drug war. Whatever, the Malaysian police and anti-drug enforcement agencies must respond strongly to deny the accusations,” Gerakan Deputy Speaker Syed Abdul Razak Alsagoff said.

He said such accusations would not only tarnish the reputation, image and security of Malaysia, the confidence of the rakyat (people) in the authorities and government would also be eroded.

“The confidence of investors, both local and foreign, will also be shaken. No one wants to invest in a drug-infested state,” he added.

Syed Razak said Indonesia had made many grave accusations against Malaysia and “to remain silent is not an option for Malaysia”.

“We have even been accused of having no surveillance of our coasts and waters! What’s really going on? What’s the truth of the accusations,” he added.

Syed Razak, who is Gerakan’s nominee to contest N.37 Bukit Lanjan in the coming 14th General Election (GE14), said the Indonesian enforcement agency “must be very frustrated with something for it to hurl such grave accusations against Malaysia”.


“Malaysia must treat the matter seriously and with urgency to resolve whatever problems it is having with Indonesia over the drug war,” he added.

"Indonesia says Putrajaya not committed to stopping flow of drugs 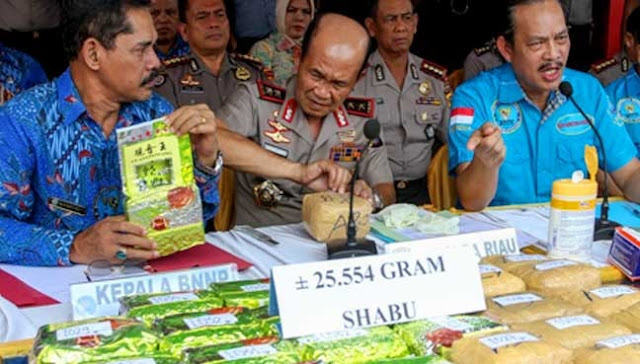 PETALING JAYA: Indonesia has expressed concern over the frequent smuggling of narcotics from Malaysia.

The deputy for enforcement of Indonesia’s Anti-Narcotic Agency (BNN) Police inspector-general Arman Depari said he was concerned over Malaysia’s inability and lack of commitment to fighting drug smuggling in the Asean region.

Indonesia’s Antara News agency quoted Arman as saying the BNN had on many occasions complained to the Malaysian government about the flood of drugs from that country to Indonesia.

“The smuggling involves an international network originating from Malaysia. This is evident from those arrested in Riau who smuggled the drugs into Indonesia through Aceh and northern Sumatra,” he told reporters in Pekanbaru, Riau, yesterday, after foiling the smuggling of 25kg of methamphetamine and 25,000 ecstasy pills.

Arman said he believed the drug smugglers crossed the Strait of Malacca from Malaysia and transhipped the drugs in international waters because there was no surveillance present there.

“A ship sails from there (Malaysia) to a certain coordinate, and another ship moves from here to the same coordinates and they transfer the items at sea. That is the modus operandi,” the Indonesian news agency quoted Arman as saying.

He said, as a result, the drugs from Malaysia had flooded Indonesia through Kalimantan and Sumatra.

Arman said BNN had increased surveillance, especially in Sumatra’s eastern waters, which were open and usually used by smugglers.

He said BNN was using other agencies, such as police and customs, to increase its surveillance of the routes used by drug smugglers.

“We have now undertaken seaport interdiction and taken preventive measures at ports and coastal areas in remote and outermost islands,” Arman said. – FMT”