It must be extremely surprising and disappointing for many, especially to the political and economic doomsayers in Malaysia, that the Asian Development Bank (ADB)’s latest report listed Hong Kong and Malaysia as the biggest Asian growth nations.

Of cause the doomsayers will still continue to dispute the ADB report and also condemn it as “inaccurate”, “bias”, “loaded”, “prejudice”, “partisanship”, favouritism” or whatever negative adjectives  that you can find.

“To the Malaysian doomsayers, nothing is positive in Malaysia so far as it does not serve their political or economic agenda,” Gerakan Deputy Speaker Syed Abdul Razak Alsagoff said.

“At least, the report is coming from an independent source, not from the federal government authorities or from a Malaysian analyst,” he added.

Syed Razak said Malaysians should take the report as a boost in confidence in Malaysia’s economy and economic policies.

“However, like in everything else, individual decisions on business and investment must still be made cautiously according to one’s personal best judgment.

“That’s because domestic and global economies are extremely volatile and sensitive to geo-political and security issues, as seen in the ongoing and growing concern in North Korea,” he added.

Syed Razak, who is Gerakan’s nominee to contest N.37 Bukit Lanjan in the coming 14th General Election (GE14), said Malaysians must seriously ponder on three matters raised by the ADB. They are:

Ø The global trade recovery is helping boost exports in Hong Kong and Malaysia while demonetisation and the implementation of the new goods and services tax (GST) regime in India have dented consumer spending and business investment;

Ø Governments should monitor debt levels and asset prices while strengthening their financial positions; and

“The outlook may be good for Malaysia and investors, but it is a folly to simply jump to conclusions and take economic environments for granted.

“It is now for the state and federal governments to leverage on the positive outlook and strengthen its economic and business progress.

“As for individuals and investors, and also governments, wise and prudent decisions are the guide to potential success,” Syed Razzak added.

Here’s the news by Bloomberg and Reuters as posted by The Star Online: 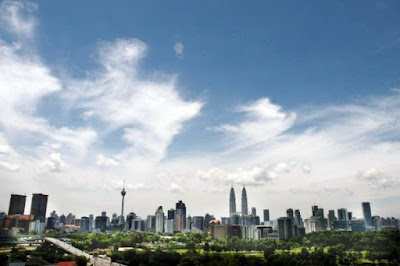 KUALA LUMPUR: Hong Kong and Malaysia are proving to be the biggest growth surprises in Asia.

The two nations received the largest upgrades for this year among major economies in the Asian Development Bank’s latest outlook released on Tuesday. Meanwhile, India received the steepest downgrade.

The global trade recovery is helping boost exports in Hong Kong and Malaysia while demonetisation and the implementation of the new goods and services tax regime in India have dented consumer spending and business investment. India’s economy is seen recovering in 2018 with expansion forecast at 7.4%.

As a whole, the outlook for developing Asia is robust even as risks remain including sudden changes in US monetary policy and geopolitical or weather-related disasters. The unwinding of stimulus in the US “may drain capital from the region, which would challenge Asia’s financial stability,” according to the report.

Higher bond yields could push up long-term financing costs at the same time that a strengthening U.S. dollar would prompt more capital outflows from the region.

In economies like Indonesia, Malaysia, Thailand, and Taiwan, there is room for accomodative policy, the ADB said. In the Philippines and South Korea, the case for stimulus may be less clear because the growth upturn is protracted and price pressures are intensifying. – Bloomberg

MANILA: Developing Asia is on track to grow faster this year and next, the Asian Development Bank said on Tuesday, buoyed by a pick-up in world trade and China’s expansion, but it flagged risks from tightening US monetary policy.

That is unchanged from its July estimates, but higher than the 5.7% forecast it gave for both years in its Asian Development Outlook (ADO) released in April.

China is expected to grow 6.7% this year and 6.4% next year, the ADB said, unchanged from its July estimates.

“Growth prospects for developing Asia are looking up, bolstered by a revival in world trade and strong momentum in PRC (China),” ADB chief economist Yasuyuki Sawada in a statement after the bank updated its 2017 outlook.

Still, the ADB said regional policymakers need to brace for potential capital outflows and higher borrowing costs as the Federal Reserve begins the unwinding of a decade of aggressive monetary stimulus and continues to raise interest rates.

“Because long-term interest rates in many Asian economies are closely linked to those in the US, policymakers need to strengthen their financial positions further and monitor debt levels and asset prices,” the ADB said.

The ADB said Indonesia, Malaysia, Thailand and Taiwan could benefit from a boost in accommodative policy, but intensifying inflationary pressures make the case for stimulus in the Philippines and South Korea less clear.