It is simply shocking that the Department of Higher Learning director-general has been tasked with auditing and replacing irrelevant courses offered at public universities.

“This is a ridiculous and laughable situation, to say the least,” Gerakan Deputy Speaker Syed Abdul Razak Alsagoff said.

“Is the Higher Education Minister (Idris Jusoh) saying and admitting that his ministry has not been monitoring the quality of tertiary education constantly and yearly?

“Is he also admitting that his ministry had not been keeping up with the times and global changes, especially in technology, to ensure that Malaysia’s education policies and strategies are at all times up-to-date and relevant?” he asked.

Syed Razak, who is Gerakan’s nominee to contest N.37 Bukit Lanjan in the coming 14th General Election (GE14), said: “It is only common sense that all leaders and administrators in both state and federal governments are expected to be vigilant, keeping up with the times on all matters that affect the quality of service and leadership demi rakyat dan negara (for people and country).


“If one cannot even do that, why then are you in public office or a civil servant?”

Syed Razak said the monitoring and response to global changes and national interest must be carried out daily so that “we can respond swiftly with measures to remain relevant or to ensure that we don’t lag, at least, if not lead”.

He said it was just not enough to “suddenly see the need to review the relevancy of any matter just like that or at the snap of the fingers, so to speak”.

“Reviews and changes need to be carried out fast or swiftly. Any delay or delaying is not an option because we will just end up playing catch up with others all the time,” he added.

Department of higher learning DG has been tasked with auditing all courses offered at public universities. 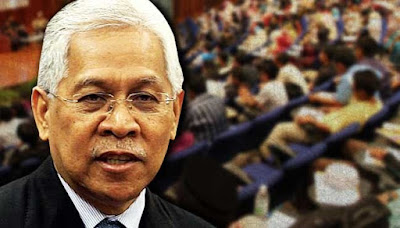 He said new courses which fulfilled industry needs would be introduced in line with the industrial revolution 4.0.

He said the director-general of the department of higher learning had been given the task of auditing all courses offered at public universities.

Idris was speaking at a press conference after visiting the Centre for Human Development and Technocommunications Studies at Universiti Malaysia Perlis (UniMAP) during his one-day visit there today.

Idris also held talks with UniMAP lecturers at the main campus in Pauh Putra on the university’s needs to achieve the objectives of TN50.

He said in general, the marketability of public university graduates in Malaysia had improved as the structure of these universities was constantly being upgraded."