This blog was spot on when it posted on Sept 11, 2017, an article titled “BUKIT LANJAN: Has the kurang ajar Kim gone too far?” (Read this for context: https://bukitlanjan.blogspot.my/2017/08/bukit-lanjan-has-kurang-ajar-kim-gone.html)

“It is heartening and a relief to the rest of the world that China has also responded significantly with stronger measures against its nuclear-armed ally, North Korea,” Gerakan Deputy Speaker Syed Abdul Razak Alsagoff said.

Syed Razak, who is Gerakan’s nominee to contest N.37 Bukit Lanjan in the coming 14th General Election (GE14), said “there is certainly a limit to tolerate the constant intimidation by North Korea”.

“It has been conducting so called missile tests, firing into the ocean. But lately, North Korea has gone too far or bolder with its tests by firing missiles over Japan’s sky and into the sea.

“Only a ‘sick’ man like Kim will jeopardise his people and country’s future that way. A hermit state like North Korea only worsens the economic sufferings of its nationals,” he added.
International news agency AFP reported this and was posted by online news portal The Malaysian Insight (TMI): 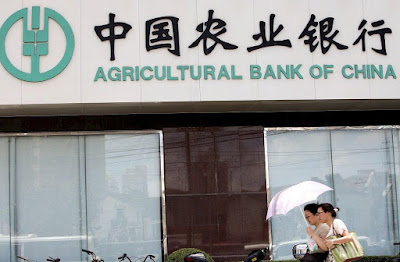 The Agricultural Bank of China is one of the nation's 'big four', whose staff have confirmed financial curbs for North Korean clients. – EPA pic, September 12, 2017.

Staff at branches in Beijing and the border city of Yanji, a major trade and transportation hub between the two neighbours, said their banks had banned North Koreans from opening new accounts and some had even started to close existing ones.

"We have frozen their accounts, which means they cannot withdraw (money)," a staff member at a Yanji branch of China Construction Bank told AFP.

"They cannot use (their accounts) in Yanji any more, as well as our services... We have already started to inform them to cancel their accounts. If they can cancel, we let them cancel. If they cannot, we will not let them use it.”

An employee at the Industrial and Commercial Bank of China in Yanji said the restrictions began last year or the previous year.

"We also won't open new accounts now. We offer no service to them. Opening accounts or foreign currency operations, we don't offer such services to them.”

Other local bank branches said the bans had been carried out for a while, but they did not remember exactly when.

Some said they had received a written document on the ban, but others said there had only been a "verbally delivered" message.

A staff member at a Beijing branch of China Construction Bank said they received a notice in May, and North Koreans could no longer conduct transactions.

An Agricultural Bank of China employee in Beijing said North Koreans were barred from opening new accounts, but those with current accounts could carry out transactions.

Zhang Liangui, a professor at the Chinese Communist Party Central Committee school, said the ban was "very normal" and in accordance with UN resolutions.

China has long been accused of lax enforcement of UN sanctions on North Korea, and US President Donald Trump complained earlier this year that trade between the two countries surged in the first quarter.

In June, the US slapped sanctions on the Bank of Dandong, a Chinese bank located at the border with North Korea, which it accused of "facilitating millions of dollars of transactions for companies involved in North Korea's WMD (weapons of mass destruction) and ballistic missile programmes".

But, China has insisted that it adheres to the UN sanctions.

China also backed yesterday's UN resolution, which bans textile exports and restricts shipments of oil products, though it did so only after Washington toned down its original proposal to secure the backing of Beijing and Moscow. – AFP, September 12, 2017/TMI"