The Polis di-Raja Malaysia (Royal Malaysia Police) has digitalised crime prevention in Malaysia and it deserves support from every Malaysian.

Called the Volunteer Smartphone Patrol (VSP), it is aptly tagged “Together Against Crime”.

He said there was no reason, whatsoever, for anyone to not support VSP for neigbourhood and public safety. (Google “Volunteer Smartphone Patrol” for details and free registration)

“Be the eyes and ears for the police in crime prevention. All law-abiding Malaysians can unite and help the police to effectively bring the criminals to book,” he added.

Syed Razak, who is Gerakan’s nominee to contest N.37 Bukit Lanjan in the coming 14th General Election (GE14), said he had on the launch of Pulse Of Bukit Lanjan on Dec 3, 2016, listed “Support community and neighbourhood public security/safety programmes and projects” as “one of my eight key pledges in wanting to serve Bukit Lanjan constituents.

(Read this for details: https://bukitlanjan.blogspot.my/2016/12/bukit-lanjan-for-harmonious-and.html)

Zani told those present at the dialogue, organised by Persatuan Residen Saujana Damansara, that “we are aware that the public find petty thefts extremely irritating”.

“We will strive our level best to also help curb petty crime. But we will also need your help to be our ears and eyes. If there is no feedback from you, we will not be able to strategise our crime-prevention effectively,” he added.

“There are many cases that had gone unreported for reasons best known to the victims. How then do we know that that location is çrime-prone and therefore needed special or focused crime prevention action,” he added. 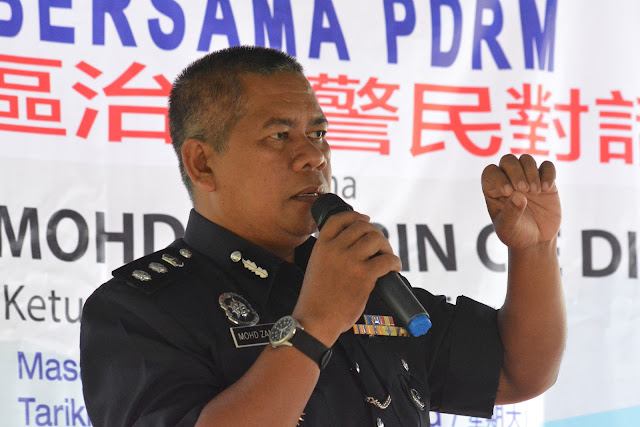 Zani urged the public to take the trouble to lodge police reports or use the VSP to help police in updating and improving crime-prevention strategies.

He also noted the grouses of the residents and pledged to look into them, especially on the growing concern of a group of “about 40 Mat Rempit” cyclists haunting the neigbourhood.

“We will act to put a stop to their rendezvous. We certainly don’t want what happened in Johor Baru (where eight such cyclists were killed in an accident in the wee hours of the morning) to happen here,”he added.

Asked on whether police could act on accidents on non-gazetted roads, Zani said: “To us all roads are public roads, whether gazetted or not”.

“The only problem or issue that may arise and affect accident cases is insurance claims. And that is not our concern.”

“Some residents had raised the issue of roads that had yet to be handed over to the local government authorities and gazetted.

“Who then is responsible for maintaining the roads? There are also many other concerns, like whether the local government had any right or business to issue parking tickets and summonses on such roads,” Syed Razak said.