The world communities, especially Malaysians, should go all out to support Unicef’s call to develop a children-friendly Internet.

The Internet has been extensively and globally abused by criminals and pornographic promoters.

“Therefore, it is time that a safer cyberspace or Internet be developed exclusively for children,” Gerakan Deputy Speaker Syed Abdul Razak Alsagoff said.

He lauded Unicef’s call to develop the “children’s internet” as there were too many inappropriate postings in cyberspace that were unfit for the view of the young.

“There is certainly an urgent need to do something about what can be viewed or accessed in the Internet by those who are still at a tender age.

“They are too young to understand what is good and what is bad. Their character may even be adversely affected by the postings in the Internet,” he added.

Syed Razak, who is Gerakan’s nominee to contest N.37 Bukit Lanjan in the coming 14th General Election (GE14), urged Unicef to “not talk only”.

“I am pretty confident that governments all over the world can help fund the development of ‘a children’s internet’. Unicef can take the lead immediately to approach governments for help.

“The Malaysian Communications And Multimedia Commission (MCMC), as a regulator in Malaysia, must also take the lead to promote the healthy use of the Internet by children.

“Please do something useful for Malaysian communities, Mr MCMC,” he added.

"Internet needs to be made for children too, says Unicef 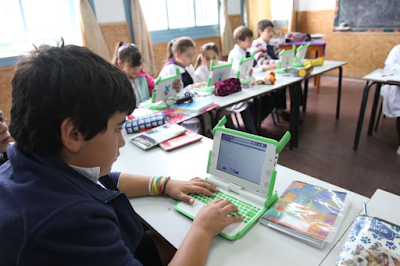 Pupils work on laptops in a school in Las Brujas, Uruguay. Young people aged 15 to 24 are the most connected age group globally, with 71% online compared to 48% of the total population, according to a Unicef report. — dpa

Unicef is calling for an Internet that is more friendly towards children, amid growing threats of abuse in an online world made for adults.

In a report released on Monday, the UN children's fund called for youths to be put at the centre of new digital policy promoting increased access, digital literacy and protection against new threats.

"The Internet was designed for adults, but it is increasingly used by children and young people, and digital technology increasingly affects their lives and futures," Unicef's executive director Anthony Lake said in a statement.

The report calls for an expansion of access to online resources worldwide to tackle digital inequality: in Africa, three out of five young people are still offline, compared to just one in 25 in Europe, it notes.

But the digital world also opens children up to new threats, including cyberbullying and new forms of child abuse, and safeguards must be ramped up in line with new technologies, Lake said.

Predators can more easily make contact with children through anonymous and unprotected social media profiles and game forums, and new technologies like cryptocurrencies and the dark web facilitate the sharing of harmful content, such as "made-to-order" or live-streamed child sexual abuse material.

The report calls on governments and the private sector to keep children safe online by safeguarding their privacy, teaching digital literacy and advancing ethical standards to protect them from abuse and exposure to unsuitable materials. — dpa"