September 26, 2017
BUKIT LANJAN: Local talents underutilised? Is there still any left in Malaysia or are they just plain lazy?

It sure is laughable reading Economic Planning Unit (EPU) deputy director-general Johan Mahmood Merican claiming local businesses are not transforming themselves fast enough to benefit from the digitalisation of the global economy.

Really? Are you sure there are still local talents left in the country’s human capital? Did you not read about the many Malaysian-born talents who are making waves overseas?

“Do you think they even care about returning to serve in Malaysia?” Gerakan Deputy Speaker Syed Abdul Razak Alsagoff said.

He said the federal government needed to seriously and honestly identify and hone the skills of local talent from young.

“The federal government can continue with its agenda to help the Malays in education and skills training. But it must also not just lose the talented non-Malays.

“The federal government must seriously set up an exclusive skills and tertiary education centre to hone the young. And this centre will take in talented Malaysians, irrespective of race and creed.

“This is the only practical way to try and stop the brain drain. Let them pursue their preferred choice of academic programme and skills, and they will not leave Malaysia,” he added.

Syed Razak, who is Gerakan’s nominee to contest N.37 Bukit Lanjan in the coming 14th General Election (GE14), said no country could progress swiftly “if it does not seriously plug the brain drain problem”.

“Malaysia is striving to achieve developed nation status. It cannot hope to achieve such a status without an abundant supply of competent, quality and hardworking human capital with the right skills for the digital era,” he added. 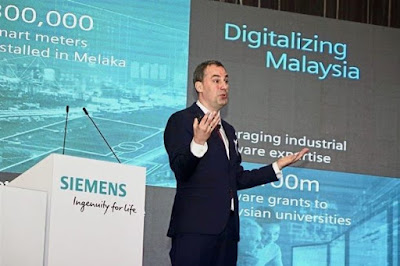 Siemens AG managing board member for Asia, Australia and Energy Management Cedrik Neike said that the company has been operating in Malaysia for the past 110 years and will continue to contribute to its digital transformation journey. — Siemens

He said the companies are too reliant on cheap, unskilled foreign labour. Instead they should be reskilling and upskilling their ­existing talent pool by assisting them in learning new skills that are relevant in the digital age.

Malaysian companies are also not taking advantage of the local talent pool. For instance, Malaysia has the third largest number of users offering their talents for hire on Upwork, an international ­freelancing platform.

“We have a whole bunch of Malaysian talents sitting at home providing work for corporations around the world,” he said.

“We are at fault for offering one type of work arrangement when our talent pool has evolved beyond that.”

First, there needs to be digital equality. While statistics show that the mobile penetration rate is over 150% and most Malaysians on ­average own more than one ­smartphone, it might not be true in the rural areas.

Secondly, we need to address the disruption due to digitalisation. Every time productivity is improved and new ways to do things are introduced, somewhere, someone might be losing his job.

“We should be cautious of the flipside of that as well as it’s a ­societal issue that is not to be taken lightly,” said Bhonde.

Lastly, he said the role of private sector is crucial. “In the Silicon Valley, the startup community is the key driver of the digital economy and the Government has mostly stayed out of the way,” said Bhonde.

However, he believes that Malaysia is a unique case study as the Government, through its ­agencies and think tanks, is leading the way in developing the digital ecosystem."