Artificial Intelligence (AI), science and technology are slowly but surely not only set to change human lifestyles, it is also threatening jobs.

That Iceland is reportedly set to become an “island of drone deliveries” is a stark wake-up call to all, especially Malaysians, to be prepared for drastic technology changes.

“Science and technology will spare no nation in transforming job opportunities and lifestyle. You will be rendered ‘primitive’ if you fail to adapt to the changes to the future,” Gerakan Deputy Speaker Syed Abdul Razak Alsagoff said.

“Worse still, if the government of the day of any country does not start thinking out of the box and to prepare its rakyat (people) to be equipped with the right skills, that country will be left far, far behind in economic progress,” he added.

Syed Razak said a country’s socio-economic policies must be tuned to ensure that its rakyat “are educated and trained to be equipped with the right knowledge and skills that are needed in new technologies”.

Syed Razak, who is Gerakan’s nominee to contest N.37 Bukit Lanjan in the coming 14th General Election (GE14), said two ministries, education and human resources, “must take the lead to come up with drastic new policies to transform and prepare Malaysians for the future”.

“The two ministries must abandon its traditional mindset, issues and concerns to ensure that their policies only lead to guiding and rebuilding the country’s human capital.

“A country cannot hope to make any progress if its human capital is outdated, unproductive and inefficient. Science and technology and new technologies are evolving at break-neck speed.

“Our education and human capital must also keep up with the fast global changes in new technology to remain relevant to socio-economic progress,” he added.

Here’s what is happening in Iceland as reported by international business news service Bloomberg and posted by The Star Online: 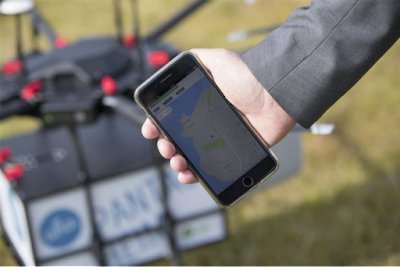 Aha CEO Maron Kristofersson holding a mobile phone displaying information for the delivery of a package by a drone manufactured by Flytrex as it sits nearby, in Reykjavík, Iceland. Flytrex’s drones will fly more than 2.5 kilometres (1.6 mile) across a large bay that separates two parts of the city, delivering for online marketplace Aha. — Bloomberg

An autonomous drone delivery company has started commercial operations in Reykjavik, Iceland, one of the first in the world to offer the service on demand.

The drones will drop off the goods at a designated landing pad where they will then be taken to their final destination by foot, scooter or car. The companies hope to receive regulatory approval by the end of the year to transport orders straight to customers’ backyards. 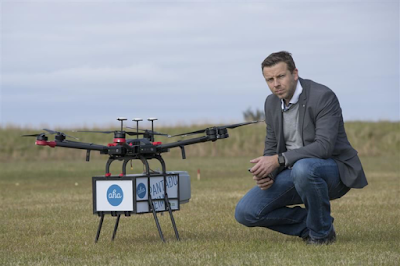 Kristofersson posing for a photograph next to a Flytrez drone carrying a delivery package in Reykjavík, Iceland. — Bloomberg

“Drone-based disruption is only taking off, with Iceland as its runway,” Bash said separately in a statement.

Using drones will save Aha 60% of delivery costs to that area of Reykjavik, where it serves 8,000 customers, he said. Currently the drones make up to 10 deliveries a day, and will double the number by the end of next week.

Some heavy-hitters are working on developing drone delivery, including Amazon.com Inc and Google parent Alphabet Inc. Airbus SE, the European aerospace conglomerate, is starting a company to provide unmanned aerial services as well, estimating in May that the field could increase to more than US$120bil (RM511.68bil) annually as the use of such fleets expands.

Amazon in December made its first-ever drone delivery – a television streaming device and a bag of popcorn – to a customer in the UK, where the company is testing the technology, in part because of strict US regulations. 7-Eleven and Domino’s have used Flirtey drones to deliver packages, and Zipline flies unmanned aircraft to parachute medical supplies to remote African villages.

Bash, who previously headed SpaceIL, an Israeli nonprofit aiming to land the first Israeli spacecraft on the moon, doesn’t see Amazon.com Inc as a competitor. ”Amazon serves Amazon customers,” he said in a phone interview. “That leaves the rest of the market open for other drone companies.”

The Israeli company is carrying out trial deliveries in countries other than Iceland, and has regulatory approval in one nation to do backyard drop-offs, said Bash, declining to elaborate.

Flytrex has raised US$2.5mil (RM10.66mil) from angel investors including Swiss venture capitalist Daniel Gutenberg, who also invested in Mobileye, the maker of software for driverless cars acquired by Intel Corp earlier this year for US$15bil (RM63.96bil). It plans another financing round in the next few months, Bash said. — Bloomberg"