BUKIT LANJAN: The worst ever is coming for the equities market? It’s the end of the bull run?


BUKIT LANJAN: The worst ever is coming for the equities market? It’s the end of the bull run?

“What is in store from tomorrow (Monday Feb 12) and next week is anybody’s guess. But the equities market outlook is certainly looking gloomy,” Gerakan Deputy Speaker Syed Abdul Razak Alsagoff said.

He said no one could say for certain when the global markets would stabilise but players who don’t have holding power would be in very risky positions.

One report quotes American veteran investor Jim Rogers, 75, as saying the next bear market in stocks will be more catastrophic than any other market downturn that he’s lived through.

And the other article poses the question: Are we seeing the end of the bull run?

Here are the two articles reproduced for the convenience of readers: 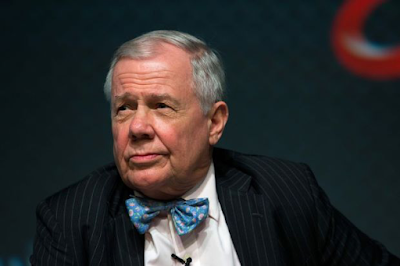 Jim Rogers is not surprised that US equities resumed their selloff Thursday and he expects the rout to continue.

JIM Rogers, 75, says the next bear market in stocks will be more catastrophic than any other market downturn that he’s lived through.

The veteran investor says that’s because even more debt has accumulated in the global economy since the financial crisis, especially in the U.S.

While Rogers isn’t saying that stocks are poised to enter bear territory now -- or making any claim to know when they will -- he says he’s not surprised that U.S. equities resumed their selloff Thursday and he expects the rout to continue.

“Debt is everywhere, and it’s much, much higher now.”

The plunge in equity markets resumed Thursday, as the S&P 500 Index sank 3.8 percent, taking its rout since a Jan. 26 record past 10 percent and meeting the accepted definition of a correction.

The Dow Jones Industrial Average plunged more than 1,000 points, while the losses continued in early Asian trading Friday as the Nikkei 225 Stock Average dropped as much as 3.5 percent.

Rogers has seen severe bear markets before. Even this century, the Dow plunged more than 50 percent during the financial crisis, from a peak in October 2007 through a low in March 2009.

That, he says, will be the point when stocks go up again. He said he’ll buy an agriculture index today, reiterating his view that prices of such commodities have been depressed for some time.

“I’m very bad in market timing,” Rogers said. “But maybe there will be continued sloppiness until March when they raise interest rates, and it looks like the market will rally.” - Bloomberg/The Star Online

The end of the bull run?

Review: Volatility and panic was the theme of the week’s equities landscape. Just as observers had cautioned on overheating and the overbought US equity market environment, the recent declines on Wall Street put a screeching halt to the bull trend.

As at the latest sell-off yesterday, analysts steadfastedly tried to soothe the nerves of fleeing investors, confident in the belief that strong economic fundamentals and corporate earnings will ensure the steady performance of markets.

The pullback was triggered by a US payroll report yesterday that saw wages rising and giving rise to expectations of higher inflation and more Fed hikes. The attendant result would be the shutting of the money taps and the end to an era of easy money.

It was the catalyst for a correction, long overdue some say. These are the same parties who tout the pullback as healthy for the market in the longer term as it establishes a more sustainable footing for share prices.

Over the course of two-day decline on Friday and Monday, the Dow Jones Industrial Average slipped nearly 1,850 points. On Tuesday night, the index slipped as much as 567 points in intra-day trade, pushing cumulative losses across the 10% threshold and into correction mode.

The oversold conditions of the US markets meant a technical rebound was due. As selling continued at Tuesday’s US open, the markets dipped further into oversold territory, paving the way for prices to retrace losses by late afternoon.

On Bursa Malaysia, the start of the week saw furious selling by foreign investors. Monday displayed symptoms of a sharp retreat as overseas investors turned net sellers of RM268mil, but on Tuesday, the net withdrawal was palpable to the tune of RM868mil.

Immediate support levels on the benchmark FBM KLCI gave way in succession, and the index fell a total of 58 points over the course of two days. The 1,800 key support held, however, despite a brief dip into 1,796. It served as a platform for a positive bounce, ending Tuesday’s session at 1,812.

A sense of normalcy returned to the local market on Wednesday following the US’s Tuesday night rebound. The FBM KLCI followed suit by retracing losses, rising 24 points to 1,836.88.

Foreign investors also failed to return to the local market, registering another net outflow on Wednesday, suggesting that the keen interest in emerging markets had faded from the change in investment landscape.

Global markets continued to be jittery as evidenced by the unsteady performance in the wider regional markets. The rebound in Asia failed to hold any conviction and the results were mixed, with the strongest perfomers making slight retracements.

Wall Street proceeded with another slight dip into the red overnight but the local market held steady on Thursday. The FBM KLCI put in a positive performance, rising a modest 2.76 points to 1,839.44.

During the course of the week, the US dollar mounted a march against global currencies. The US dollar index rose about 1.6% to 90.165.

The ringgit, while holding firm against other major currencies, weakened against the US dollar to 3.93 yesterday.

Oil prices suffered a double blow in the form of the rising US dollar and shale oil production levels. Brent crude headed towards US$64 a barrel while WTI dropped towards US$60.

Overview: While the local market is tracking the corrective energy of Wall Street, it is holding within a range of 1,800 to 1,840, suggesting that the local market is moving towards a period of consolidation rather than correction. Stateside, analysts are sharing the belief that the Wall Street sell-off will lead to a rebound before things deteriorate into a bear market.

The technical indicators indicate a shift in momentum in the local index, but that a firm downtrend has not yet taken hold. The slow-stochastic has crossed into a “buy” signal. The daily moving average convergence/divergence, which signalled a bearish divergence preceding the week’s decline and crossed into a “sell” signal on Monday, remains afloat above the zero line.

The FBM KLCI will see resistance at the 1,825 mark and 1,840 above that. Despite the nervous energy that has taken over the equities markets, 1,800 has proven to be a reliable springboard against the negative retracement. Should it break on the downside, there is further support at 1,785. - The Star Online"