Useless warlords in party a "deadly" hindrance to political revival

A lot of has been politicians/warlords in the party still like to ‘control’ people and determine the outcome of our national party elections!

But in the 2018 NDC where Gerakan have been totally decimated and out of BN without representation in Putrajaya, without coucillors in local government and even without medals and pingat to give out some persistent useless ‘warlords’ still wanna play ‘God’ and to them I can only say”Go Fly Kites” and allow common sense to prevail and that each delegate should vote for the best candidate to help rebuild Gerakan from the ashes in a New Beginning for Gerakan !

I usually don’t mince my words so for those “yang makan cili maka pedaslah rasanya kan?”

I am contesting for a VP slot as Calon No: 3 out of Eight candidates and I hope and implore each and every delegate to put your hands on your heart and choose those that can help in the rejuvenation and revival of the party and of course those who are good and are on the respective ‘cai dan’ to vote them in and to reject those lousy fellas on the ‘cai dan’ and vote those who believe in the ethos of our Party Gerakan and who won’t embarrass the party with their poor quality (which of course they and their backers/warlords won’t admit).

Make us all Gerakanist proud and aim to be in the corridors of power again in GE 15 and always serving the rakyat and “Berani Kerana Benar”.

The following is a reproduction from a blog post from No News Is Bad News:

Tomorrow (Sunday Oct 14) is Selangor Gerakan’s elections and it will be the party’s return to the Opposition platform after nearly four decades or 40 years.

Its national elections is scheduled for next month.

Gerakan, had in 1969, toppled the Alliance (later re-branded as Barisan Nasional) as a new Opposition party.

Although the party central committee had decided to leave the BN coalition that ruled Malaysia for 61 years until they were given the boot by Malaysians in the May 9 14th General Election (GE14), party insiders say the party is split between pro-BN warlords and those who have started to see the political reality and genuinely want to change and rebuild the party. 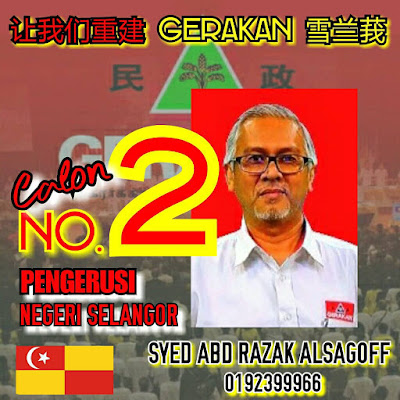 Selangor, being the richest state in Malaysia, is thus the true political battle ground for any leadership to prove its worth.

Thus, the Selangor Gerakan electoral results will show clearly whether the party is truly on its path to rebuild, change and win back the confidence of Malaysians as a party in the political Opposition platform.

If the old pro-BN warlords in Selangor Gerakan win the majority of the seats, then the party is set to be permanently buried politically.

And these pro-BN warlords are easily identified - those who had remained silent post-GE14 and say nothing to upset the Umno-led BN.

View the above video on the few who dare to speak up to try and rebuild and make Gerakan politically relevant to Malaysians again.

And, here’s what a Gerakan founder’s son have to say about the party’s struggle to keep it politically afloat in the 21st Century:


"Gerakan must return to its roots, says founder’s son

Syed Farid Alatas says it’s going to be tough but Gerakan needs to rebuild itself by looking at the philosophy of its founding fathers.

PETALING JAYA: Sociologist Syed Farid Alatas has advised Gerakan to return to its founders’ original idea for the party – a multiracial one that balances liberal and socialist ideals.

His advice comes in the wake of an announcement by the party yesterday that it was leaving Barisan Nasional (BN) to become an independent opposition outfit.
Syed Farid, son of the late Syed Hussein Alatas who was one of the founders of Gerakan in 1968, said the party had strong integrity during its early period.

“They should relook at the early philosophy of the founders. Then they can plan an effective role as an opposition party,” the National University of Singapore (NUS) professor told FMT.

He said Gerakan should have quit BN a long time ago, adding that the decision to leave only now was “several years late”.

“Even in the last several years when it was widely perceived that BN and Umno were corrupt and playing the racial card, Gerakan remained with BN,” he said.

He said the problem Gerakan faced in exiting from BN now was that it opened the door for the public to question the party’s true motive.

“The question remains as to what their real commitments are. It’s going to be tough for them to rebuild themselves,” he said.

But he said it was important nonetheless for a political entity like Gerakan to strengthen itself again as the country was in dire need of competent opposition against the Pakatan Harapan (PH) government following the recent general election.

“Malaysia needs opposition parties of calibre and morality. Currently, we don’t have parties in the opposition with that standing,” he said.

“Both Gerakan and Umno need to revamp themselves and make fundamental changes which require new leaders with the right values.”

Syed Hussein Alatas, who was also a professor at the University of Singapore, now known as NUS, was the founding pro-tem president of Gerakan before he was succeeded by co-founder Dr Lim Chong Eu, a former president of MCA and the now defunct United Democratic Party.

Just a year after its formation, Gerakan formed the Penang state government after the general election of 1969, with Chong Eu assuming the chief minister’s post which he held till 1990.

The party joined the Alliance, the precursor to BN, in 1972."