The problem with the local media is their treatment, or the lack of it, when it comes to achievements by school children.

To the media, it is not newsworthy, thus such news are given little prominence.

“What makes their achievements amazing is that they are the first Malaysians to compete in the Russian innovation and technology competition.

“They really deserve more attention and rewards from the governments (both state and federal) so as to motivate others to strive for excellence and go for innovation,” he added.

Syed Razak, who is Gerakan’s nominee to contest N.37 Bukit Lanjan in the May 9 14th General Election (GE14), urged the media to provide more media exposure and recognition to the students and their schools for their achievements.

He said the students and their schools’ achievements in Moscow (Russia) “is testimony that there is no shortage of talent and brains in our education system”.

“What is lacking is recognition from the governments and the private sector. There must be a monitor in the education system to accurately identify potential talent and to hone their skills,” he added.

Syed Razak said the only way for Malaysia to achieve developed nation status “is to raise the quality, productivity, competency and talent of our human capital”.

“And, there is no other way to achieve that than through an effective education policy and system,” he added.

Here’s what The Star Online posted on the school children’s victories in Moscow: 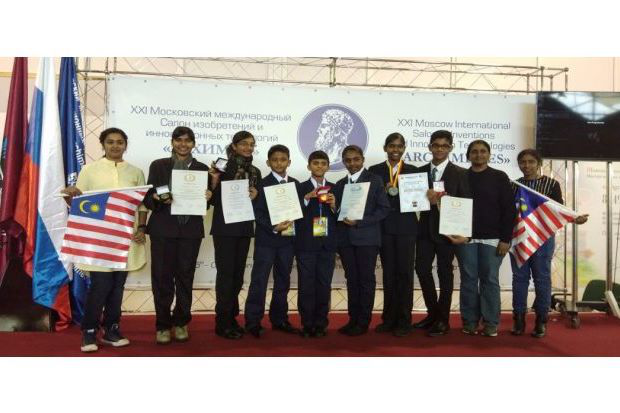 The six teams were the first Malaysians to compete in the 21st Moscow International Salon of Inventions and Innovation Technologies (Archimedes), which was held from April 5 to 8.

Archimedes is a scientific and educational event dedicated to modern technologies comprising of exhibitions, scientific conferences, presentations, and competitions.

Niranjhnaa Moorthy, a student from SMK Sultan Badlishah said he had participated in many local competitions previously but this was his first at international level.

"I was amazed to see so many other students with great ideas and I did my best to show my talent to the world.

"I made friends from all over the world and it is a really valuable experience which will help me in my future," Niranjhnaa told The Star.

Yogesvary Krishnasamy, a teacher from SJKT Arumugam Pillai, also pointed out that there were many incredible projects that showed great potential showcased at the competition, ranging from robotics to the use of solar power.

"It is exciting to think that one day, these students' ideas could be the future," she said.

Yogesvary said a lot of hard work went into their project, adding that bringing a concept from the idea to the execution stage was the biggest part of the challenge.

"That is why nurturing bright young minds is so important and why competing with students and innovators from all over the globe is really challenging," she said.

Prior to the Archimedes competition, students had to compete at national level before they were selected to compete in Moscow.

The winning projects at national level were assisted by the Talent Developing Society (TDS) to compete at international level.

TDS president Jaya Devi Sreeniwasan said when they realised that no Malaysian has participated in Archimedes before, this prompted them to make history.

"Every child has great potential to shine. When given equal opportunities, they are able to show their hidden talents," she said.

According to Jaya Devi, TDS has helped hundreds of underprivileged students in the past 10 years to develop their talent and guide them in various aspects to succeed in multiple national and international competitions."