The federal government has revealed that Internet addiction in Malaysia had reached an alarming rate.

Whether one hates it or not, whether cyberspace is good or bad, the internet influence on mankind cannot be curbed or stopped.

In today’s 21st Century digital world, to curb the growth of technology is to return to the “caves”.

“The only way for governments to react is to ensure users do not abuse the Internet. And the only way to reach out to the users are through education and awareness campaigns,” Gerakan Deputy Speaker Syed Abdul Razak Alsagoff said.

He said it was understandable why the young, from aged one and above, are attracted to electronic gadgets. “It’s the games and access to information”.

However, Syed Razak said, the federal government was also partly to blame for “pushing” adults to rely on the Internet for “news and information”.

“The tightening of control over the mainstream media had not only affected the credibility and integrity of government-owned or government-friendly media.

“It has effectively resulted in readers stopping reading and trusting news dished out by both mainstream print and electronic media,” he added.

Syed Razak, who is Gerakan’s nominee to contest N.37 BukitLanjan in the coming 14th General Election (GE14), said government regulating pressures had resulted in the mainstream media being cowed into self-censorship, thereby publishing only lopsided reports.

“In fact, the federal government should not resort to trying to influence or control the media. Give them the freedom to disseminate news and information.

“If they abuse the freedom by publishing inaccurate, distorted or false news, then there are enough laws, both civil and criminal, to haul them up legally for punishment.

“This way, the federal government would endear to Malaysians and also win the confidence and support of the rakyat (people),” he added. 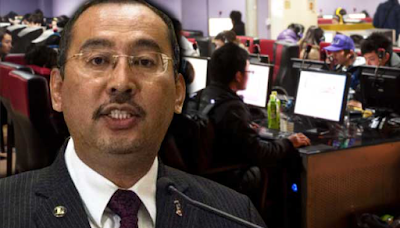 Jailani, who is also Hulu Terengganu MP, said this was based on findings of a three-phase study conducted by the Malaysian Communications and Multimedia Commission (MCMC) from 2010 until Friday (Dec 15).

He said in the first phase of the study carried out on 725 respondents, 89% were found to be addicted to the internet.

In addition, 60% of respondents showed elevated levels of anxiety and 32% had major depression.

“We are now moving onto the second phase with the development of intervention modules and programmes to address problems of anxiety and depression among internet users,” he told a press conference after officiating a Hulu Terengganu parliamentary constituency circumcision ceremony.

According to Jailani, the government began working with the education ministry from 2015 to train 34 school counsellors for the implementation of intervention modules and programmes in selected schools throughout Malaysia as a measure to control the addiction.

“This included the development of intervention modules in addressing internet gaming and pornography addiction,” he said, adding that 24.1 million Malaysians used the internet for a variety of activities.

He added that 80% used the internet to access social media with average usage of over four hours a day. 76.1% were youths aged between 20 and 49. - Bernama/FMT"