Malaysians welcome the setting up of a special criminal court to hear sexual crimes against children in every state by the end of next year.

It is a timely move to treat such heinous crimes seriously and to protect children.

He said all Malaysians should help to be “the eyes and ears” of communities and societies and be on the alert or lookout of suspicious situations.

“Report suspicious happenings and behaviour. Prevention is better than cure. So, save children from being abused before the crime is committed or perpetuated further.

“At least society can help reduce the pain and sufferings of children who are being abused,” he added.

Syed Razak, who is Gerakan’s nominee to contest N.37 Bukit Lanjan in the coming 14th General Election (GE14), urged Malaysians to help play a significant role in protecting “our children”.

“Do not underestimate the power and effectiveness of vigilant communities and societies. Lets all try to contribute to the safety and future of our children,” he added.

"It’s the ones kids trusted that turn out to be guilty ones
NATION
Monday, 11 Dec 2017

PUTRAJAYA: They are people trusted by the children.

But sadly, parents, lecturers, a tennis coach and even a pastor and an imam are part of the list of alleged offenders brought to the Special Criminal Court on sexual crimes against children so far.

The latest additions are foreigners who have been charged with various sexual offences against children here, said Chief Registrar of the Federal Court of Malaysia Datuk Seri Latifah Mohd Tahar.

“As of last month, 15 foreigners were charged in court. All the accused are not related to the victims,” she said in an interview.

“The oldest was 77,” Latifah said, adding that the victims were aged between one and 17.

A total of 352 cases have been registered since the court began proceedings on June 22 until Nov 30.

Of this number, 77.8% or 274 cases have been disposed of, while there are 78 ongoing cases in the court in Putrajaya.

“These cases have not exceeded the timeline of 12 months. This means the court is on track and there are no unreasonable delays,” Latifah said.

While various offences were tried in court, most or 80.3% of them involved carnal intercourse against the order of nature.

However, this percentage has been skewed by the most horrific case dealt by the court so far – the widely reported case of a father who was slapped with 623 counts for sodomising and raping his 15-year-old daughter.

“What happened was almost unthinkable. We hope the existence of the new law and special court will combat such sexual crimes and protect children from these heinous acts,” Latifah said.

Another appalling case involved an eight-year-old who contracted gonorrhoea after she was raped.

“She is still undergoing treatment. The impact is severe, prolonged and real,” lamented Latifah.

Other cases heard by the court involved rape (11.3%), sexual assault like molest (6.9%) and incest (1.5%). Seeing the severity of the crimes, the special court has been determined in handing down deterrent sentences to offenders.

The new Sexual Offences Against Children Act which was enforced on July 10 has come in handy, she said.

“With the new Act, coupled with the Child Act and Criminal Procedure Code, the court is able to mete out a combination of punishments.

“Aside from long-term punishment and the maximum whipping, the court can also hand down community service orders, counselling, compensation orders, police supervision and enable perpetrators to be put under good behaviour bonds,” Latifah said. 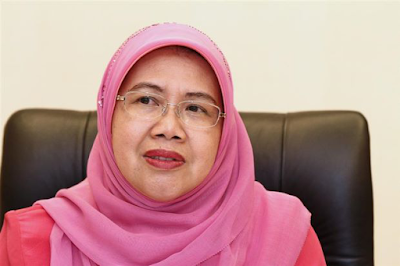 PUTRAJAYA: The fight against child sexual predators and paedophiles is set to gain more muscle, with every state to have a special court to hear such crimes against children by the end of next year.

All 12 branches of the Special Criminal Court on sexual crimes against children will be set up by the end of 2018, said Chief Registrar of the Federal Court of Malaysia Datuk Seri Latifah Mohd Tahar (pic).

Currently, there is only one such court in Malaysia – at the Palace of Justice here.

Lauding the expansion, Latifah said there has been a rise in the humber of charges filed at the special court since it started operations six months ago.

To top it off, new standard operating procedures (SOPs) on child protection and handling of such sexual offences will be launched on Wednesday by Minister in the Prime Minister’s Department Datuk Seri Azalina Othman Said.

The SOPs will include support services for the child and the role of child counsellors in helping victims to deal with their trauma.

“Currently, a child psychologist from the Social Welfare Department is asked to be present during proceedings only upon the court’s request.

“More support systems for the child should be in place from day one until the end of their case,” Latifah said, adding that such services included transporting the child to court and home.

Believed to be the first of its kind in South-East Asia, the special court was launched by Prime Minister Datuk Seri Najib Tun Razak on June 22.

Each branch of the court will come with a special child witness room, equipped with a video-link system to enable the child to give evidence in a safe and comfortable setting without having to face the perpetrator.

Known as the Permata Room, the facility is sponsored by the Permata Foundation, of which the Prime Minister’s wife Datin Seri Rosmah Mansor is patron.

With the additional courts, Latifah said judges with 15 years’ experience and well-versed in criminal law have been identified to be assigned to preside over the courts.

“Training will also be given to judges on how to handle child sex crimes,” she said.

Since it has been up and running, Latifah said the court has seen a smooth delivery of justice, with most child victims being able to cooperate and testify without problems.

“There were a few cases where victims were pressured by their family to withdraw their complaints, especially when the alleged perpetrator was a family member.

“At the end of the day, it is up to the prosecution,” she added.

On offences committed online, like child grooming, Latifah said this new area of the law could have potential challenges.

“The chain of evidence and exhibits has to be fully intact. If there is a break in this chain, it will be difficult to prove the crime,” Latifah said.

She added that investigation officers, lawyers and judges must have an understanding of how the web works to handle such cases."