It sure is shocking to read claims by the National Single Mothers’ Association (PITKM) that there are an estimated one million single mothers in the peninsula.

If the figure is somewhat accurate, then it is a grave national social issue that needs urgent attention.

“The governments must respond swiftly with positive action if they are to be taken seriously as a truly caring government,” he added.

Syed Razak said the Women, Family and Community Development Ministry should, therefore, be given a much bigger allocation in the coming Budget 2018 to launch programmes and projects to help ease the woes of single mothers and non-governmental organisations like PITKM.

He said the problem needed swift and immediate action “because it affects single mothers and their children”.

“At least two million Malaysians, including children, are affected. It can well become a national social disaster,” he added.

“We must all show that we are caring to the needy and those who have been exploited and left in the lurch, especially single mothers and their children,” he added.

Here’s online news portal The Malaysian Insight (TMI)’s report on the plight of single mothers and their children:

"Marriage over but exes’ debts still there 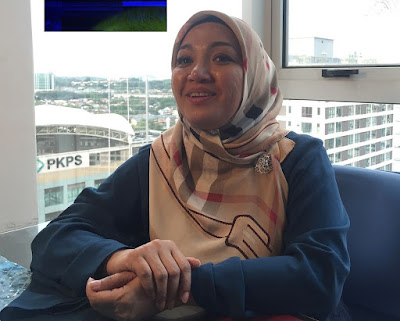 Selangor National Single Mothers’ Association chairman Lizatul Akma Zulkifli says her organisation does not have the means to support divorced mothers financially but can act as a middleman to find those who can provide help for the women. – The Malaysian Insight pic, October 4, 2017.

ANA was once forced to sell drugs for her abusive husband and after 23 years of beatings, she decided to divorce him and take their five children with her.

But it wasn’t just the emotional trauma that made it difficult to move on. The 50-year-old discovered that she had inherited about RM14,000 in debts from her husband.

Unknown to Ana, her former policeman husband had taken out loans under her name and after their divorce, the debt burden is now hers.

Ana is not alone. According to the National Single Mothers’ Association (PITKM), there are an estimated one million single mothers in the peninsula.

Many carry some form of debt leftover from the marriage but accurate figures are hard to get, says the association, because single mothers are reluctant to come forward to talk about it, says Selangor PITKM chairman Lizatul Akma Zulkifli.

Not only are they forced to raise their children on their own, these women have to service debts that their former husbands took on.

Their plight made headlines last month when it was highlighted to Prime Minister Najib Razak at a 2050 National Transformation (TN50) dialogue in conjunction with National Women’s Day in Kuala Lumpur on September 4.

Unresolved debts of their former husbands are a problem that could hamper the government’s own 2020 action plan to uplift the livelihoods of single mothers, a group that is classified as economically vulnerable.

In Ana’s case, she was blacklisted by the banks because of those debts. She could not even get micro-credit loans to start a business to provide for her five children.

Her husband even bought a car under her name but she cannot recall signing any document.

“I was told by IRB (Inland Revenue Board) that I bore my ex-husband’s debts as his income tax was put under my name.

“He was an insurance agent and he declared income tax from insurance sales using my name. The total was RM14,000.

“I tried to clear the debt but I was told to pay the whole amount instead of by instalments,” she told The Malaysian Insight.

“I was devastated. Where can I get RM14000 in the blink of an eye?” she said and started tearing up.

“It is unfair that I have to bear all the debts. I raised my kids all alone. I want to get back up without him but I am being dragged down because of his debts. What did I do wrong? I tried. It was not like I did not put in effort, I did but I am stuck.”

At present, there are almost no options to help such women, said Lizatul.

“As an organisation, we do not have the means to support them financially but we can act as a middleman to find those who can provide sufficient help for single mothers.”

After Lizatul brought up the issue at the TN50 dialogue, Kuala Kangsar MP Mastura Mohd Yazid approached the association and promised to help.

In other cases, loan sharks have even come after unsuspecting single mothers to collect on their ex-husband’s debt.

“Our house was splashed with paint by his loan shark,” said Siti Rahayu Mohd Ali.

She had no idea that her husband had taken on more debts from loan sharks to pay for his taxi.

When that occurred, she decided to quit the marriage and take their four children with her.

But Siti Rahayu had to also take her husband’s debts with her, which totalled RM30,000 by the time they divorced in December last year.

It has almost been a year since Siti Rahayu left the marriage and she still has to pay off RM20,000, without a single sen from the ex-husband.

“Thankfully, my cousin helped to pay off the loan sharks first so now I am just owe my cousin, which is better because there is no interest.”

Currently there are also no legal means to write off or forgive the debts of these women, even though that debt was originally from the husband, says PITKM Selangor adviser Azmi A. Hamid.

“They (former husbands) just wash their hands and walk away and there is no channel and no resources to support the single mothers.

“The legal channel for them to find ways and means to go back to original life is absent. Even if they voice up, nobody would step up to protect their rights,” he said.

Currently, the association helps single mothers get back on their feet through counselling sessions and giving them courses which teach them a trade, such as sewing or cooking, to help them earn an income.

Azmi said PITKM Selangor is drawing up a comprehensive proposal to provide long-term solutions to the issues faced by single mothers and hopes the government will take them seriously.

For now, women like Ana and Siti Rahayu have very little recourse left but to pay off slowly and painstakingly what their husbands borrowed.

“I hope that my story would allow others (single mothers) to come forward and share their stories so the government will implement and enforce laws that protect women who were abused in their marriage,” Ana said. – October 4, 2017."