BUKIT LANJAN: Malaysia needs to learn a thing or two about managing SWFs from Norway

August 23, 2017
BUKIT LANJAN: Malaysia needs to learn a thing or two about managing SWFs from Norway

In January 2014, Norway’s sovereign wealth fund (SWF) ballooned so much due to high oil and gas prices that every Norwegian became a theoretical millionaire.

“As reported in 2014, the Nordic nation is proving to be an exception as others struggle under a mountain of debts. It still holds true now,” Gerakan Deputy Speaker Syed Abdul Razak Alsagoff said.

Syed Razak said there was no need to compare size and population between Norway and Malaysia to justify “our failure in managing our wealth wisely”.

“Norway has only oil and gas. Singapore has zero natural resources but the tiny island republic has two hugely successful multi-billion-dollar SWFs.

“Malaysia is blessed with rich natural resources - tin, rubber, oil palm, oil and gas, etc. But where are we today, financially and economically?” he asked.

Syed Razak, who is Gerakan’s nominee to contest N.37 Bukit Lanjan in the coming 14th General Election (GE14), said: “It is clear that our country’s financial and economic experts, advisers and professionals in Bank Negara Malaysia (BNM) and governments (state and federal) need to buck up.

“Their performance, thus far after 60 years of Merdeka (Independence), is nothing short of disappointing to the rakyat (people),” he added.

Here is international news agency Reuters’ report on Norway’s SWF’s performance in the first half of this year followed by a BUSINESS INSIDER narration on SWFs:

Norway's wealth fund earns record $63b from investments in first half 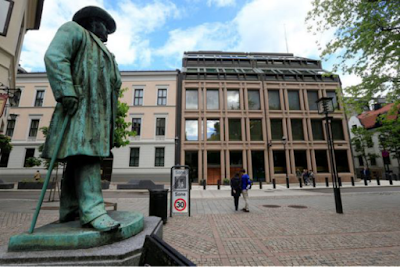 OSLO: Norway's sovereign wealth fund, the world's largest, reaped a record 499 billion Norwegian crowns ($63 billion) from its investments in the first half of the year on the back of rising stock markets, it said on Tuesday.

The fund, which generated a return of 6.5 percent on its global assets in the first six months of the year, invests revenue from Norway's oil and gas industry and is so large it amounts to 2-1/2 times the size of the Norwegian economy.

"The stock markets have performed particularly well so far this year," Trond Grande, deputy chief executive, said in a statement, though he cautioned this was unlikely to be repeated.

The fund, whose return of 2.6 percent in the second quarter beat its benchmark by 0.3 percentage points, has for some time said its returns are likely to ease as ultra-low interest rates drag down performance.

However its investments underpin Norwegian state expenditure and the government withdrew 16 billion crowns in the second quarter, having taken out 23 billion in the first three months.

The fund reiterated it would remain an investor in Britain after Brexit, where it is one of the country's largest foreign investors.

"Our judgement of the situation is the same as it has been: The UK will remain an important investment destination for us," Grande told Reuters on the margins of the results presentation.

Britain is the second-largest country destination for the fund after the United States, accounting for 9.1 percent of total investments at end-2016.

In May the fund expanded its partnership in London's Regent Street with the Crown Estate by acquiring stakes in three additional properties for 30 million pounds ($38 million).

A government-appointed commission said in June the fund should be split from the central bank, partly because of the demands it was placing on the central bank's board and senior management.

Deputy central bank governor Egil Matsen, in charge of supervising the fund, said the fund would publish its views on the proposals in October. "We are working intensely on formulating our answers," Matsen told Reuters, declining to say whether he had drawn any early conclusions. ($1 = 7.9145 Norwegian crowns) ($1 = 0.7796 pounds). - Reuters/The Star Online"

"BUSINESS INSIDER assembled 10 facts to help you figure out what sovereign wealth funds are all about. Check them out below:

1. The Kuwait Investment Authority was the first sovereign wealth fund ever created. 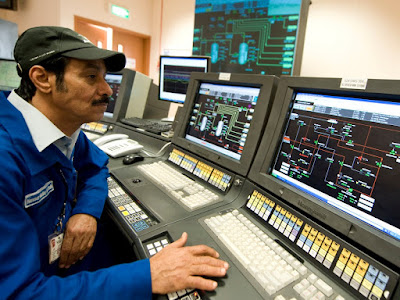 Kuwaiti Control Operator Nasser Athbi works at the new Gathering Center-24 in the northern oil fields of Sabriya. The Center, with a capacity of 165,000 barrels a day, was destroyed by invading Iraqi forces in 1990 and went back into operation in 2010.REUTERS/Stephanie McGehee

In light of the discovery of oil, this fund was established in 1953 to invest excess oil revenues. One of the largest wealth funds in the world, it is estimated to have over $592 billion in assets.

2. Most funds are State-Owned. 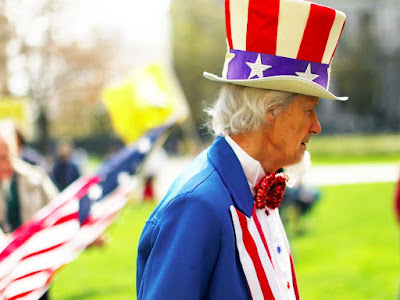 Sovereign wealth funds are owned by governments and are financial vehicles that invest in real and financial assets like stocks, bonds, real estate, precious metals, as well as private equity and hedge funds, on behalf of a nation or sovereign state.

These funds are predominantly backed by commodity revenue and foreign-exchange reserves. Their broad objectives include shielding and stabilizing their budget and economy from excess fluctuation in revenues and exports. More specifically, they strive to deplete unwanted liquidity, increase savings for future generations and fund social and economic development.

3. These funds have grown in popularity 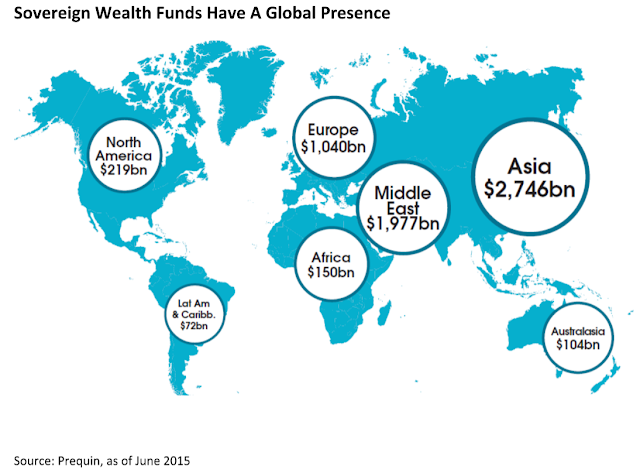 The latest wave comes from Africa, with countries like Angola, Botswana, and Nigeria recently establishing funds, and Tanzania and Uganda pledging to do so. Veterans like Russia, Kazakhstan, and Ghana have all started new funds, and Saudi Arabia and Kuwait have both recently announced plans to also establish new funds.

Sovereign wealth funds have grown substantially in size. According to the Sovereign Wealth Fund Institute, the combined assets of these funds now exceeds $7.2 trillion, twice the size of what it was in 2007 and more than what is managed by all of the world’s hedge funds and private-equity funds combined. East Asian and Middle Eastern funds account for 72 percent of total sovereign assets under active management.

5. There are two categories of funds. 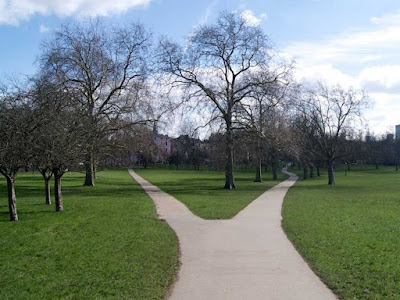 Sovereign wealth funds typically fall into two categories, commodity or non-commodity, depending on how the fund is subsidized. 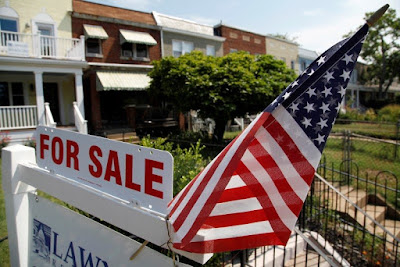 A U.S. flag decorates a for-sale sign at a home in the Capitol Hill neighborhood of WashingtonThomson Reuters

Norway’s $823 billion sovereign-wealth fund recently stated it would allocate as much as 15% of its capital into real estate.

Less than two weeks ago, the sovereign wealth funds of Azerbaijan, Abu Dhabi and Qatar agreed to invest a combined $380 million to buy and develop three separate properties in Milan.

Abu Dhabi Investment Authority, or ADIA, has in fact become one of the world’s biggest landlords. It recently bought 58 million square feet of U.S. industrial property from Exeter Property Group LLC for $3.15 billion.

7. The funds are actively borrowing. 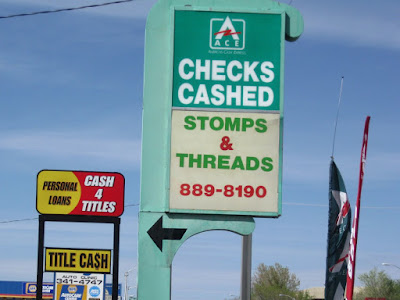 According to Dealogic, sovereign funds have borrowed a whopping $100 billion since 2007, of which close to two-thirds has stemmed from net oil exporters like Bahrain and Kazakhstan.

Less than eight years old, Kazakhstan’s wealth fund, Samruk-Kazyna JSC, already boasts a net worth of $55 billion and played a vital role in pulling the country out of the global financial crisis.

Plunging oil prices have forced this fund to borrow $1.5 billion in its first syndicated loan last October to aid a cash-strapped subsidiary saddled with a troubled oil-field investment.

8. They are also frantically selling. 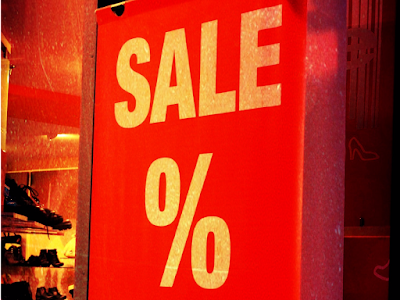 With nearly 60% of sovereign-wealth-fund assets dependent on energy exports, plunging oil prices are upsetting much more than just energy companies.

Funds like Saudi Arabia, Russia or Norway, that depend on their governments' oil export revenues as their main source of capital, have been forced to withdraw billions of dollars, in a desperate attempt to reduce the gaps in national budgets. 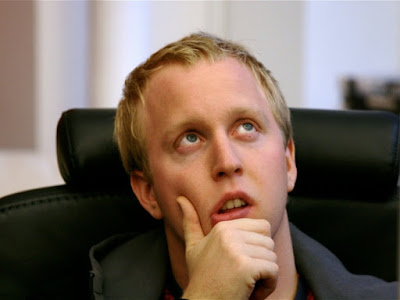 Uncertainty is fueled by the fact that many of the funds do not divulge their size, holdings, investment strategies, or even performance, making it difficult to measure what, if any, risk they present to the global financial system.

This creates a significant blind spot in the markets. According, to the IMF, “a substantial change in the path of asset accumulation by sovereign wealth funds will likely have a direct effect on financial markets.” In fact, a large-scale liquidation of funds’ extensive bond holdings could drive up interest rates. 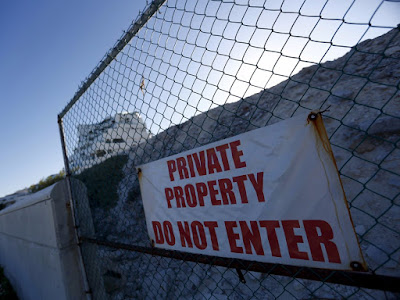 A sign that reads " Private property, Do not enter" hangs on a fence at a beach in CancunEdgard Garrido/Reuters

The United States and Europe have both repeatedly stressed the need for supervising and even regulating these funds. A bulk of the world's biggest sovereign wealth funds lack transparency and proper governance.

The International Forum of Sovereign Wealth Funds is urging members to follow a code of conduct known as the Santiago Principles. Among other things, this code calls for annual reporting, clear governance rules and effective risk management.

Because the code is voluntary, many members choose not to publish public annual reports or even reveal their asset size.

According to political risk group GeoEconomica, who publishes annually its Santiago Compliance Index, those in the Gulf region score particularly low. Qatar, for example, does not publish an annual report nor does it divulge the amount of money it manages.

Four of the five largest sovereign funds, China, Kuwait and Abu Dhabi’s, and Singapore's GIC have all been ranked as partially compliant, while Norway, the world's largest, is fully compliant."