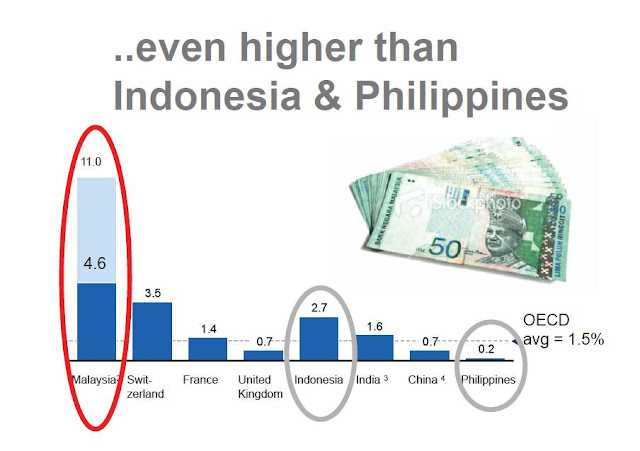 That’s not the correct news angle or focus for the report.

“It is the outstanding debt of RM36.9 billion owed by credit card holders that is most worrying,” Gerakan Deputy Speaker Syed Abdul Razak Alsagoff said.

“This means a significant percentage of Malaysians aged between 20 and 74 are buying goods and services on credit. If they are able to settle their debts promptly every month, then it is not an issue or of any domestic and national concern.

“But we do know that there are many who are struggling or do not settle their credit card bills. That's why we also have tens of thousands of credit card debtors made bankrupts,” he added.

Such debts, Syed Razak said, must be monitored to ensure that they do not go out of control and add to the country’s federal debt.

Last March, it was reported that Malaysia’s total external debt rose 9% to RM908.7 billion in 2016, Bank Negara said, which is equal to 73.9% of the country’s gross domestic product (GDP).

“What’s the total debt, both domestic and foreign?”

Syed Razak, who is Gerakan’s nominee to contest N.37 Bukit Lanjan in the coming 14th General Election (GE14), said as far back as 2012, many economists believed that Malaysia had already breached the legislated debt ceiling of 55% of Gross Domestic Product (GDP).

TheEdge financial weekly was quoted to the effect:

The then International Trade and Industry Deputy Minister Mukhriz Mahathir was reportedly to have “accidentally” leaked out some alarming information while speaking to new students in Universiti Utara Malaysia (UUM) on Sept 6, 2012.

In trying to paint a rosy picture of the country’s economy, Mukhriz claimed that the nation was on the right growth track due to “wise” financial management, without reliance on heavy overseas borrowings.

“The government has about RM800 billion in borrowings. Of this figure, foreign borrowing is only 17%. The bulk is from local financial institutions,” TheEdge reported Mukhriz as saying.

Now, is our federal debt as revealed by Budget 2013 at RM502.4 billion or is it RM800 billion? Mukhriz’s argument is also flawed when he tries to justify good financial management by differentiating between domestic and foreign borrowings.

A debt is a debt. It is still what you owe, nothing more, nothing less.

“Now, if TheEdge had quoted Mukhriz correctly, the federal debt five years ago was already RM800 billion! The total external debt was at RM908.7 billion in 2016?

He said Bank Negara Malaysia (BNM) must paint the right picture of the country’s financial status so that Malaysians know exactly “what they are facing and make the right decisions to face the economic and financial challenges”.

“Why is there any necessity to paint rosy pictures? Just give the correct statistics for businessmen and investors to make the right decisions for the future of Malaysia,” he added.

"3.6 million credit card holders in Malaysia as of June 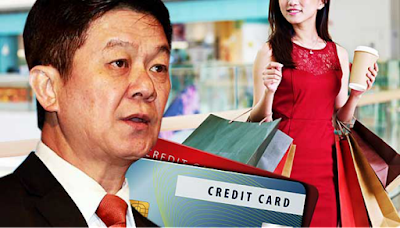 KUALA LUMPUR: There were 3.6 million main credit card holders in Malaysia as of the end of June, according to Deputy Finance Minister Lee Chee Leong.

Based on numbers issued by the Department of Statistics for 2016, the figure accounted for 18% of the 20 million Malaysians aged between 20 and 74.

“As at end of June, the outstanding balance for credit cards was RM36.9 billion, of which 7.3% or RM2.7 billion was overdue balance.

He was replying to a question from Jaspal Singh on the percentage of the populace having credit cards, the amount of unpaid credit card debt and number of insolvency cases.

On the number of insolvency cases, Lee said 845 individuals aged below 30 were declared bankrupt in the first half of the year.

Replying to a supplementary question from Jaspal pertaining to the ministry’s monitoring of online gambling cases involving the use of credit cards, Lee said Bank Negara Malaysia has issued guidelines requiring credit card issuers to restrict any transactions for such activities, identified by the business category code. 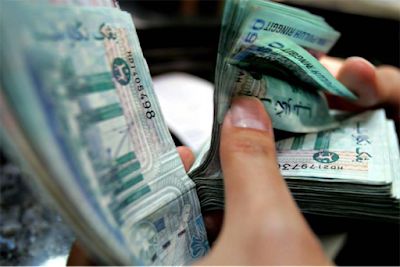 PETALING JAYA: The weaker ringgit contributed to the higher cost of foreign debts.

Slightly less than two-thirds of the country’s external debt are denominated in foreign currencies. About a third of this debt is made up of interbank borrowings and foreign currency deposits in local banks.

In its 2016 annual report, the central bank said the country’s external debt remained manageable, given its currency, maturity and balance sheet profiles.

“The profile of Malaysia’s external debt remained healthy with more than one-third of total external debt being denominated in ringgit, thus limiting the risks arising from foreign exchange fluctuations.

“The remaining portion of the external debt, which is denominated in foreign currency, is mostly hedged either naturally using export earnings or through the use of financial instruments,” it said.

Most of these debts, it said, were offshore borrowings, which were raised mainly to expand productive capacity and to improve the managenent of financial resources within corporate groups.

At the end of 2016, the country’s offshore borrowings fell to 42.7% of the GDP compared to 60% of GDP during the Asian Financial Crisis.

Bank Negara said the rollover risks were also contained, as 58.6% of the total external debt was of medium to long-term maturity.

“In addition, not all short-term external debts pose a claim on reserves due to the availability of export earnings and external assets which enable borrowers to meet external obligations without necessarily creating a claim on international reserves,” it said.

The central bank said the reserves were ample to facilitate international transactions and sufficient to finance 8.5 months of retained imports and were equivalent to 1.1 times the short-term external debt."