Remember the days when children were interacting physically and healthily, playing marbles and all that is innocent?

Those days are gone. Today, it is all about electronic games and gadgets, and the influence on children is worsening by the day with technology advancement and new games.

He said there were pros and cons for new technology and all that’s new but the social values of the young “are depreciating fast”.

“They are too engrossed with e-games that they don’t realise they have become anti-socials,” he added.

Syed Razak said there was no way to stop the progress of science and technology but “parents need to pay more attention to the influence of technology on their children’s behavior and lifestyle”.

“There is no doubt children today are being distracted by electronic gadgets and technology, dictating too much of their focus and time which should have been spent on their basic education to acquire knowledge,” he added.


Syed Razak, who is Gerakan’s nominee to contest N.37 Bukit Lanjan in the coming 14th General Election (GE14), said the social values of physical interaction of the young had deteriorated.

“They have been spending too much time in cyberspace and e-games that they are alien to community and social interactions.

“Parents in this digital age must spend more time ensuring that their children are not consumed by the digital world,” he added.

Here’s what was posted by The Star Online on the mammoth growing sales of PCs and mobiles in SEA: 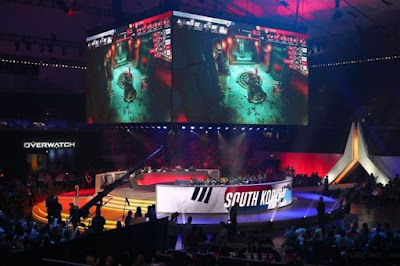 Teams competing during the Overwatch World Cup Final at BlizzCon 2017 at Anaheim Convention Centre on Nov 3, 2017 in Anaheim, California. Games intended for use at professional-level competitive tournaments are expected to push increases in South-East Asian revenue, according to a new report. — AFP

Games intended for use at professional-level competitive tournaments are expected to push increases in South-East Asian revenue, according to a new report.

They are viewed as "the primary driver for the explosive growth in PC online games," according to Lisa Cosmas Hanson, managing partner of Niko Partners, whose five-year forecast was previewed by VentureBeat.

The latest title from Californian StarCraft II studio Blizzard Entertainment, Overwatch, is gearing up for the launch of its first top-level international league season in 2018, while PlayerUnknown's Battlegrounds, developed in South Korea, has been positioning itself as an eSports contender-in-waiting.

Both Dota 2 and League of Legends are part of a Multiplayer Online Battle Arena genre, which pits two teams against each other in a tactical battle of wits and skill, and mobile iterations on the MOBA format are "a major contributor to mobile eSports," said Hanson, with Niko's summary highlighting Arena of Valor (known as King of Glory in China).


And while revenue from mobile games is to surpass that of PC games in 2018, Niko views mobile and PC gaming as complementary rather than competitive, noted VB. — AFP Relaxnews"