It is simply shocking that the Tyre Retreading Manufacturers Association of Malaysia is complaining that there are about 30 factories not authorised to make retreaded tyres.

Why hasn’t the relevant enforcement authorities acted to shut down such factories?

“There is simply no room for compromising because this is a matter concerning public and road safety,” Gerakan Deputy Speaker Syed Abdul Razak Alsagoff said.


He said retreaded or celup tyres were used by heavy and commercial vehicles, like buses, lorries and trailers.

“Celup tyres must therefore be guaranteed to meet certified quality or standards when they leave the factories for the market,” he added.

Syed Razak, who is Gerakan’s nominee to contest N.37 Bukit Lanjan in the coming 14th General Election (GE14), said the World Health Ranking 2011 had ranked Malaysia at number 20 in its list of countries with the most deaths caused by road accidents.

“Research by the Malaysian Institute of Road Safety (Miros) showed that an average of 18 people were killed on Malaysian roads daily.

“And the road accident rates, including fatal, are rising every year,” he added.

Syed Razak urged the relevant enforcement authorities to stop dilly dallying on the issue of celup tyres and act swiftly to stop factories that do not have Sirim certification.

Association: About 30 factories not authorised to make retreaded tyres

PETALING JAYA: There are about 90 tyre retreading factories in the country, but up to a third of them do not have Sirim certification, said the Tyre Retreading Manufacturers Association of Malaysia.

Its president Chin Hong Meng said the association has about 55 member factories which have Sirim certification.

"The ones which are not authorised number about 30. They should not have their tyres on the road," he said Wednesday when commenting on raids on two factories suspected to be making retreaded tyres with unauthorised Sirim stickers

Chin said that retreaded tyres are as good as original ones if the production complies with the Sirim Malaysian (MS224-2005) standard.

He said authorised retreaded tyres are not the main factor behind fatal accidents on the road.

"Road accidents caused by tyres, either retreaded or original, are slightly lower than 3% of the total," he said.

He said even new original tyres can have the tendency to fail if a particular vehicle exceeds its load capacity or the tyres are not properly maintained.

Chin also said that it is advisable for original tyres that have been worn out to be retreaded instead of discarding them as this could cause an environmental problem.

"But before retreading a tyre, we make sure that it is still safe to be used. The retreaders will do a thorough inspection before the retreading process," said Chin.

Transport Minister Datuk Seri Liow Tiong Lai said many fatal accidents on the road are due to retreaded tyres that do not follow standards. - The Star Online

Official report on accidents, fatalities over the past two years, shows Batu Pahat has most unsafe roads and also highest number of deaths. 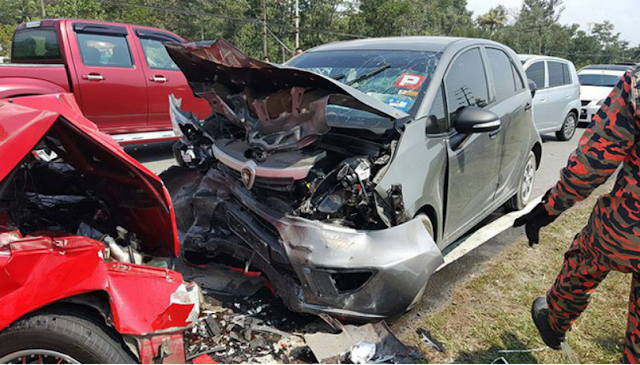 PETALING JAYA: Selangor and Johor share the dubious distinction of being the states with the most number of road accidents and road fatalities, respectively, for two consecutive years according to the police.

The report cited that Johor recorded the highest number of deaths totalling 1,040 resulting from road accidents. It had also increased by 22 from 2014.

Despite having a far larger number of accidents, the ratio of deaths was lower for Selangor, which recorded 1,028. This was 40 fewer deaths than that recorded by the police in the state in 2014.

Citing the “2015 Statistical Report on Road Accidents” report, Federal Traffic Investigation and Enforcement Department Director SAC Mahamad Akhir Darus said there was an increase of 2.8 per cent in the number of road accidents between 2014 and 2015.

“There were 489,606 road accidents last year, but the number of fatalities and injuries saw a reduction of 7.3 per cent last year, as compared with 2014,” Mahamad was quoted as saying by TheSun.

The report stated a total of 6,706 deaths occurred on Malaysian roads last year, which comes to an average of 18 fatal road accidents per day.

The report also highlighted that the number of deaths was linked to the age of the road user, with the highest number of cases involving Malaysians aged between 16 and 20 years (934 cases).

Not surprisingly, a large majority of the deaths involved motorcyclists (62 per cent, or 3,816) and pillion riders (387).

As in previous years, the Hari Raya “balik kampung” phenomena reared its ugly head with the most number of deaths occurring during the pre- and post-Aidilfitri period in 2015.

The main district in Johor which contributed to the state’s high number of fatalities among road users, was Batu Pahat.

According to the report, Batu Pahat was the deadliest district nationwide for the second consecutive year in 2015, recording 191 deaths.

Interestingly, the police acknowledge that Batu Pahat was also found to have the most unsafe roads in the country, with 165 out of the district’s 191 fatalities occurring on such roads.

For the districts with the most number of road accidents, the statistics were as follows: